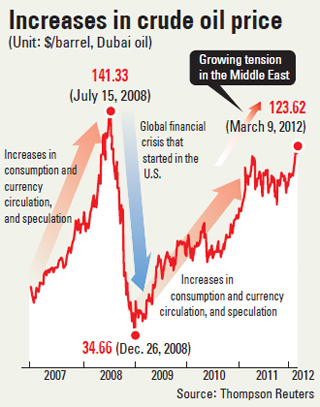 Local businesses are starting to come up with contingency plans for their energy usage as the international price of crude oil continues to veer upwards in line with growing tension in the Middle East.

High oil prices have hit airlines and shipping industries particularly hard, while manufacturers are also bearing the brunt. Many are looking at how they can scale back their energy use as oil accounts for a large portion of their costs.

The price of Dubai crude reached $123.62 per barrel last Friday, the highest it has come since the global financial crisis in 2008. If regional tensions are exacerbated, analysts expect it could smash the record of $141.33 set on July 15, 2008, and possibly smash the $200 level.

This trend has set off alarm bells within the airline industry, as oil purchases account for between 30 to 40 percent of most airlines’ operating expenses.

According to Korean Air, the country’s flagship carrier, an increase of just $1 per barrel would cost it an extra 37 billion won ($33 million) a year. Asiana Airlines, the country’s second-biggest airline, said the same price rise would see it incur additional annual charges of 13.7 billion won.

Asiana is already preparing contingency plans to put into effect if Iran closes the Strait of Hormuz, as Iranian President Mahmoud Ahmadinejad has threatened. On the one hand, the company is operating a team to develop shorter routes. On the other, it is placing more emphasis on reducing fuel consumption than on cutting flight times.

The airline said it was able to save 96.3 billion won in 2011 through a series of hedging measures and plans to adopt a similar approach this year.

Asiana is purchasing fuel together with other airlines affiliated with the Star Alliance at over 10 international airports. It intends to induce suppliers to lower their prices by encouraging competition.

Korean Air is now operating a fuel management team to deal with the fluctuating oil price. The team consists of specialists in various areas including aviation, repair and maintenance and cargo and passenger transportation.

Its planes carry a minimum amount of fuel and water to lighten their loads. They are also trying to reduce the weight of carts used on the aircrafts to lower their respective energy bills.

The airline recently introduced highly fuel-efficient cargo airplanes such as its B747-8F and B777F models.