One of the reasons why PCs are becoming slimmer and faster by the day is the arrival of new data storage devices called solid-state drives (SSD). 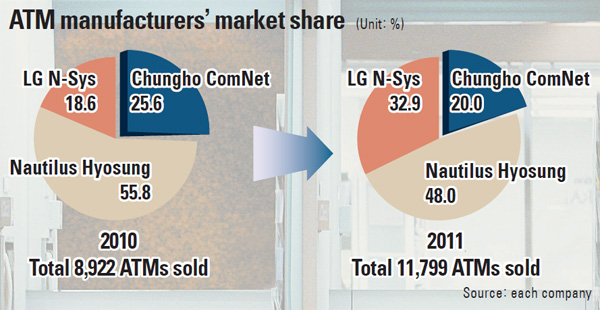 SSD is a type of flash memory drive that is conspicuously faster, quieter and more power-efficient than conventional hard disk drives (HDDs) are. However, the enhanced performance comes at a cost, and the devices have taken some flak for their higher price tags.

As some of the hottest mobile devices in the market including ultrabooks and tablet PCs have ditched traditional hard drives and opted for SSDs or other flash memory devices, some observers predict it will not be long before SSDs take over the market.

Recent media reports show that the prices of SSDs have been dropping due to oversupply while HDDs have been growing more expensive in the wake of supply shortages.

Given that cost has been a major stumbling block in the adoption of the newer drives for PC makers, the transition may now happen considerably faster than initially expected.

Chipping away at prices

Media reports show that Samsung Electronics’ 128-gigabyte SSD now costs around 210,000 won ($187) compared to a retail price of about 300,000 won three months ago. The company, the world’s No. 1 maker of computer memory chips, accounts for about half of the SSDs used in laptops, according to industry sources.

Intel’s 120-gigabyte SSD can now be picked up for just 240,000 won, about 20 percent cheaper than its original retail price early last month. Meanwhile, a similar product from OCZ Technology is even more affordable, at 200,000 won after the company slashed its price by about 20 percent.

“As PC makers strengthen their ultrabook product lineup, memory makers are expanding their SSD businesses, which is proving quite profitable,” said one market insider.

Samsung Electronics aims to sell 18 million SSDs this year, more than double what it sold in 2011. Furthermore, companies like Hynix Semiconductor, Toshiba and Micron have also jumped into the SSD market.

Samsung can afford to invest more heavily in SSD, as Samsung Electronics sold off its money-losing HDD business to Seagate, a U.S. manufacturer of hard disk drives, last April.

“[The spin-off] will open up new opportunities, such as developing various new IT applications,” said Kwon Oh-hyun, a Samsung vice chairman who oversees the company’s recently merged chip and display division.

In contrast, the HDD market has been suffering from supply shortages due to the massive floods in Thailand last year. Thailand serves as the production base for about 60 percent of the HDDs used in gadgets around the world. Industry observers forecast that it will take at least a year for the waterlogged plants to resume normal operations.

According to Danawa.com, a Korean Web site dedicated to comparing prices, the average cost of a 500-gigabyte HHD was 43,600 won last June prior to the floods. But this figure soared to 106,800 won last December.

This means that corporate consumers would only have to fork out an extra 100,000 won to purchase an SSD, triggering speculation that the migration to SSDs could happen earlier than projected.

“Due to the increased production of slimmer laptops that use SSDs, like ultrabooks, the market for these could grow five-fold by 2015,” one IT analyst said.

According to market researcher iSuppli, the SSD market reached 17.1 million units last year, with demand from laptops accounting for about 14 million of the total.

Other market watchers expect the rival devices to continue coexisting for some time as they each possess their own strengths and weaknesses, with HDDs, for example, offering greater reliability.

“The pros and cons of each are quite clear, and the purposes for which they are best suited to are also well-defined,” said one insider in the PC industry, adding that he does not believe SSD prices will decrease substantially this year.