Kim Moo-sung to stay with Saenuri

Kim Moo-sung to stay with Saenuri 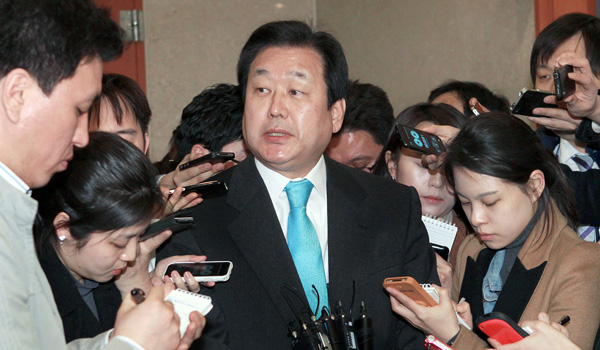 Kim Moo-sung, a former floor leader of the ruling party, talks to reporters yesterday at a press conference in the National Assembly, rejecting speculation that he will defect from the Saenuri Party in protest of the April 11 legislative election nomination outcome. By Kim Hyung-soo

As more disgruntled lawmakers leave the Saenuri Party, key members of the conservative ruling party yesterday said they will respect the party’s decision to disqualify them from seeking reelection.

Representative Kim Moo-sung, a former floor leader of the ruling party, yesterday held a press conference to reject speculation that he will soon quit the party in protest of the April 11 legislative election nomination outcome.

Kim has won four consecutive terms in Busan’s Nam B District since 1996, but the party yesterday announced its decision to make a strategic nomination in the constituency, turning down Kim’s bid for a fifth term.

Speculations were high that Kim would leave the party and run independently, but he yesterday flatly denied the projection. 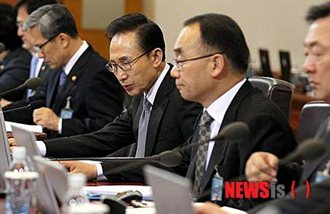 “I do not want to be the nucleus of the division of the right,” Kim said yesterday. “What good would it be if I serve another term if I leave the party and my comrades? I concluded that I must walk on the right path.”

Kim admitted that he had agonized for days before making his decision to stay with the Saenuri Party. But he decided that he must continue to serve to help the party secure another presidential victory.

“The party comes before me, and the country comes before the party,” Kim said. He, however, did not hide that the decision was bitter.

It was the second time that Kim, who used to be a key Park Geun-hye loyalist, failed to win the ruling party’s nomination.

Before the 2008 elections, Kim, along with other Park loyalists, failed to win nominations en masse as the rival Lee Myung-bak faction largely dominated the ruling party. Kim quit the party, ran independently, was reelected in his district and later returned to the party.

Another Saenuri lawmaker, Cho Jeon-hyeok, also issued a press release yesterday that he humbly accepted the party’s decision to make a strategic nomination in his constituency of Namdong B District in Incheon. “Although I failed to pass the nomination review, I have nothing to complain about,” the economist-turned-lawmaker said. “No evaluation system can be perfect, and no nomination process is complaint-free.”

Earlier in the day, the Saenuri Party announced 12 districts where it will make strategic nominations. As of yesterday, 47 districts, including the newly created Sejong City constituency, were designated as strategic areas.

Although the two lawmakers publicly accepted their fates and promised to stay with the party, it remains to be seen if their actions can stop the exodus of disgruntled lawmakers. Another incumbent lawmaker said yesterday he will quit the party, arguing that he was ousted because of his association with President Lee.

“I was not nominated because I had led efforts for Lee Myung-bak’s campaign and supported the president,” Representative Choi Byung-gook said yesterday. “If that is a wrongdoing, then I want to be judged by the voters of my district.”

The prosecutor-turned-lawmaker said he was leaving the party to freely campaign for his reelection, indicating that he will run independently in his Nam A District in Ulsan.

Another lawmaker who was expected to leave the party yesterday tentatively postponed her decision. Representative Chin Soo-hee, a key member of the pro-Lee faction, told Yonhap News yesterday that she felt betrayed by the party because the nomination process was unfair.