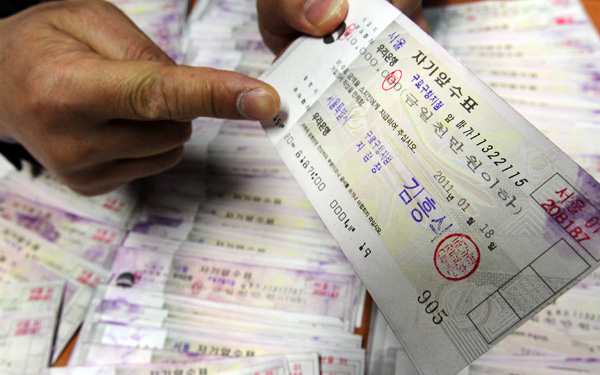 Three locals have been arrested for their alleged attempts to circulate counterfeit checks worth 10 billion won ($8.9 million) in total, suspected of having been printed in China, police said yesterday.

The three, including a 51-year-old man surnamed Kwak, are suspected of gaining about 1,000 10 million won checks from an unidentified Chinese seller in March last year and trying to circulate them in an underground money market in central Seoul, the Seoul Metropolitan Police Agency said. Three others were booked without physical detention for their alleged delivery of the checks.

Police caught the three men red-handed last month while they were attempting to use the fake checks in the underground market, which the police said were indistinguishable from genuine checks to the untrained eye and easily passed through bill validators. Police also noted that they confiscated 75 $1,000 counterfeit bills along with a forged foreign exchange equalization bond worth 500 million won from the suspects. A forged bank statement falsely showing a bank balance of 900 billion won was also confiscated.

Police were tracking the destinations of other counterfeit checks worth 23 billion won as the suspects admitted in previous investigations to possessing more fake bills.

“We will continue tracking the whereabouts of the rest of the counterfeit checks and hunting two suspected Chinese counterfeit experts,” a police official said. Yonhap