Dolphin to be released back into sea

Dolphin to be released back into sea 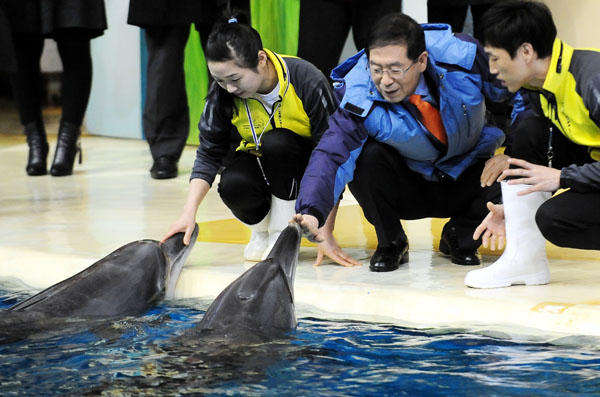 A dolphin that was once featured in a zoo in Seoul will be sent back to sea.

The groups protest that Jedol was one of three dolphins illegally captured three years ago by private dolphin show promotion corporation Pacific Land in Jeju. The public zoo of Seoul Grand Park, which is operated by the city government, purchased Jedol and two other dolphins “Geumdong” and “Daepo,” aged 20 and 18.

“I hope Jedol can freely swim and enjoy the rest of its life in waters off Jeju Island again,” Seoul Mayor Park Won-soon told media at the Seoul Grand Park. “I thought it might look awkward to citizens that their mayor is concerned with this dolphin issue, but I wanted to show my officials working in city government to work more carefully, especially when they handle a task that is related to live animals.”

The city government said Jedol will receive adaptation training in Gujwa County in waters off Jeju Island for one year so that it can survive in the wild. “The survival rate for a dolphin like Jedol being released into the wild is about 70 percent,” a spokesman at Seoul Grand Park told media. “Jedol will receive training that is necessary, such as fish hunting skills.”

The Grand Park said that it will attach a GPS tracking device to Jedol and carefully monitor it for a few months.

“He might be returned if he doesn’t adapt to the ocean,” said Lee Won-hyo, the head of the Seoul Grand Park. He added that Indo-Pacific bottlenose dolphins like Jedol can live in big groups of up to 100 dolphins, and the key to survival is how Jedol joins a group. The city government said that Geumdong and Daepo are not going to be released because they are too old.

Animal protection organizations, including Solidarity for Animal Freedom and Korea Federation for Environmental Movements have also demanded the city government stop holding dolphin shows at the park because it equates to animal abuse. The city government responded that the show will be temporarily stopped from March 19.