Lawmakers appeal to UN on refugees

Lawmakers appeal to UN on refugees 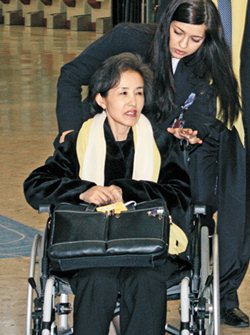 Representative Park Sun-young of the Liberty Forward Party, weak from a hunger strike, arrives in a wheelchair in Geneva on Saturday. By Lee Sang-eon

GENEVA - A group of South Korean lawmakers arrived in Switzerland to attend a UN meeting and seek help from the international community to stop the forceful repatriation of North Korean defectors arrested in Chinese territory.

This marks the first time that South Korean lawmakers have made such a move for the escapees.

Park Sun-young, a lawmaker of the Liberty Forward Party, who staged an 11-day hunger strike in front of the Chinese Embassy in Seoul, arrived in Geneva on Saturday to attend meetings of the United Nations High Commissioner for Refugees that have been held since Feb. 28. 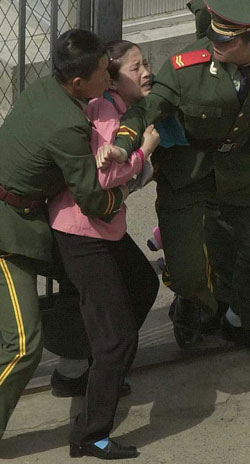 Called an “angel for defectors” for her desperate efforts to rescue the escapees, Park was recently hospitalized for exhaustion due to her hunger strike.

After she lost six kilograms (13 pounds) during the protest, she appeared at Geneva International Airport in a wheelchair.

Asked how she was, Park said, “I can bear this. My doctor dissuaded me from leaving, saying it’s too dangerous. But I pushed ahead with the trip because I staked my life on it.

“I will meet with each delegate of the countries who attend the council’s meeting and explain how defectors are treated if they are returned to the regime,” Park said. “I will stress that the matter of North Korean defectors is also a problem of the international community and the UN.”

When asked whether her actions at the UN are an attempt to put pressure on the Chinese government, Park said, “I think this is intended to help China mature into a developed country. I think it would be right to call it ‘inducement,’ not ‘pressure.’?”

According to Park, they were scheduled yesterday to meet with high-ranking UN officials at the meeting and delegates of the countries. Today, they will attend an open hearing of former North Korean defectors who were once repatriated to the North and imprisoned at the regime’s notorious labor camps or political prisons.

After that, they will attend a rally staged in front of the UN headquarters on Wednesday by a South Korean civic group and they will march in protest of China’s repatriation.

A South Korean government official told the JoongAng Ilbo that Park Sang-ki, the South Korean ambassador to Switzerland, will bring up the issue at a meeting with Marzuki Darusman, the UN’s special rapporteur on human rights in North Korea.

“Ambassador Park will appeal to keep the international law of prohibiting forceful repatriation of North Korean refugees that could prompt brutal repression of them,” the official said.

Former National Assembly Speaker Kim said at a meeting with the ambassador on Sunday, “The international community should feel regret for its cold response to the North Korean defectors. I feel sorry that China didn’t change its attitude when it knows how the defectors will be treated if they are sent back.”