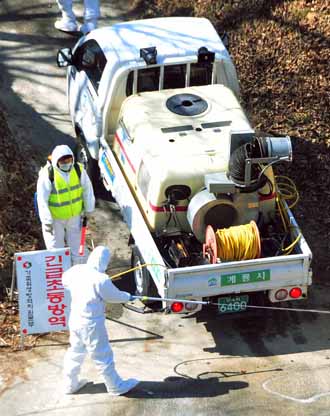 Quarantine officials yesterday sanitize a poultry farm in Gyeryong, South Chungcheong, which is suspected to have an outbreak of avian influenza, raising concerns that the country may have its first bird flu case in 10 months. [NEWSIS]

A poultry farm in Gyeryong, South Chungcheong, is suspected to have had an outbreak of avian influenza (AI), raising concerns that the country may have its first bird flu case in 10 months.

AI, commonly known as bird flu, can spread through viruses in birds, including chickens, ducks and wild birds.

According to the Ministry for Food, Agriculture, Forestry, and Fisheries yesterday, 53 chickens out of the total 450 on the farm have died over the past three days, which led the ministry to conduct an initial test to see if they had bird flu.

Based on the tests conducted by the Animal, Plant and Fisheries Quarantine and Inspection Agency, six out of 10 chickens were confirmed to have shown positive symptoms of AI, pushing the government to hold a more detailed examination. The final test results will be announced today.

“So far, we have taken preventive measures against a possible bird flu outbreak on the [Gyeryong] farm according to our manual, have announced it to be off-limits to visitors and disinfected the area,” said Kim Jeong-joo, an official from the ministry’s disease control division.

According to the ministry, if a highly pathogenic strain of AI is confirmed, it will call for a temporary quarantine of all birds being raised for production, which will be the first time in 10 months since the last outbreak of AI in May last year.

There are two types of AI - the low-pathogenic or the high-pathogenic types - of which the latter is more a serious virus because it is highly contagious, even to humans. There have been no reported cases in Korea, however, of the AI virus spreading to humans.

Korea regained its AI-free status as a nation in May of last year, allowing farmers to continue their poultry exports to countries like Japan.