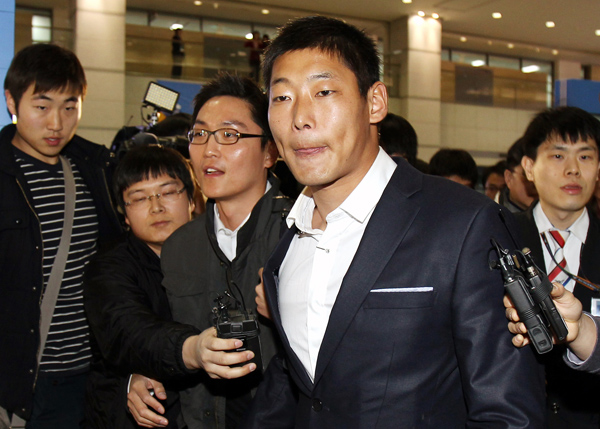 Park Hyun-jun is questioned by reporters at Incheon International Airport on Feb. 22. [NEWSIS]

After the recent publication of an interview with former Seoul LG Twins pitcher Park Hyun-jun, the ace accused of intentionally throwing walks in exchange for money, Korea Baseball Organization fans have split into two factions: those accepting of Park’s explanation for partaking in the match fixing, and those who dismiss his excuses as paltry and defend his ban from the sport. I stand firmly with the latter.

The 26-year-old right-hander is currently suspended by the KBO along with teammate Kim Seong-hyun, who has already been arrested for his participation in the match-fixing scheme. Both will soon be spending their time convincing the courts of their innocence, rather than disappointed Twins fans. The baseball club has already delivered its verdict, banning both pitchers from the team last week.

Park was considered to have a promising future with the Twins, helping them win 13 games last season. But within a day, he became a criminal and public enemy of the country’s most popular sport.

When the two receive their life-time bans from the KBO, their baseball careers will be over. They will be prohibited from participating in any professional baseball-related activities in Korea, the United States, Japan or Taiwan, who have signed mutual agreements with the KBO. Independent leagues in Central America or coaching possibilities at amateur baseball clubs in Korea leave a few doors open, but realistically, they should hang up their jerseys and accept the dead end they themselves created.

In the interview, Park first expressed regret, saying it was a “stupid idea” to participate in the match fixing. He said the reason why he got involved in the scheme was to help Kim, who was facing financial difficulties due to the cost of his father’s surgery.

Park also said Kim was blackmailed by a broker and he wanted to help him get out of the situation. The broker was asking for compensation from Kim since the 23-year-old pitcher failed to follow orders, Park said, which resulted in snowballing gambling losses.

Park admitted that he made the wrong decision when he “volunteered” to take part in the match-fixing scheme to help Kim instead of taking out a loan. It turned out to be a disastrous decision, he said, which ruined not only his life but the entire image of Korean sports.

Some fans have been swayed by Park’s words, saying a lifetime ban from the KBO may be too harsh of a punishment considering his actions were not necessarily driven by personal greed and everyone should be given a second chance.

In fact, some fans have already started a petition on the Internet to oppose the KBO’s move to ban the players permanently.

They need to wake up. Unlike other crimes committed by athletes such as drunken driving or battery charges, the match-rigging scheme stained the entire league - it was an act that transcended individual stupidity and threatened to bring down a national pastime. The league and the country need to set an example in order to suppress similar acts in the future.

Some say Park and Kim weren’t even taking part in “match-fixing” per se, suggesting the scheme should instead be referred to as “spot-fixing.” They were deliberately giving up walks in the first inning of games, which they argue did not impact end results.

But I disagree with this stance as well. Their “spot-fixing” must be called “match-fixing.” Baseball is a delicate game, with so many factors going into every at-bat. One deliberate walk can change the atmosphere of a game, and to suggest this has no affect on the end results is naive. Punishments should not be eased under this premise.

Park and Kim should be disciplined for their actions. They have shaken the foundation of Korean sport and disappointed millions of devoted KBO fans throughout the country. It will be hard to restore the trust of supporters as it is. The recent scandal has revealed how deep corruption runs in professional sports. Inappropriate sympathy is not the way to start the healing process.