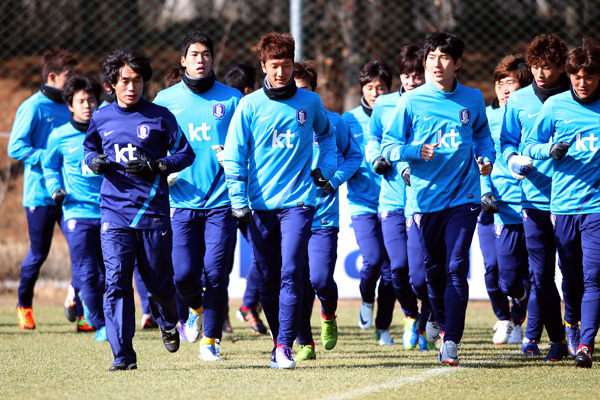 Members of the Olympic football team train at the National Football Center in Paju, Gyeonggi, on Monday. The team will face Qatar tonight at 8 p.m. at the Seoul World Cup Stadium for their final round of Asian qualifiers for the 2012 London Olympics. [YONHAP]

Korea has already secured its pass to the London Games, but Olympic football team coach Hong Myung-bo said that the young Taegeuk Warriors will not slow down when they face Qatar in the final qualifying match tonight at Seoul World Cup Stadium. 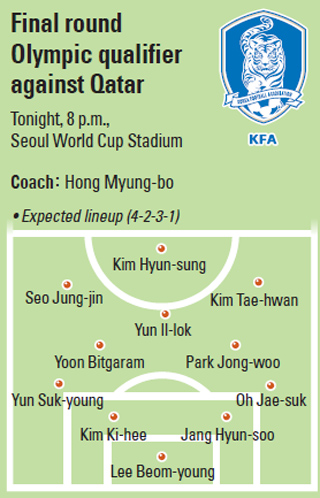 The Under-23 football team clinched one of the 16 slots for the 2012 Olympics by beating Oman 3-0 on the road on Feb. 22. With one game left to play, Korea has 11 points with three wins and two draws, while second-place Oman has seven points, meaning the team stays atop Group A regardless of tonight’s result.

But coach Hong said the team will not ease up, with a strong lineup starting in front of home fans to wrap up the campaign on a positive note.

“We won’t think of this match as a final qualifying match, but will think of it as a first match on the Olympic stage,” Hong said on Monday.

The 43-year-old coach also noted the challenge from Qatar will be tougher than usual.

The Middle Eastern team is currently ranked third in Group A with six points, only one point behind Oman. Since the runner-up in each group still has a chance to reach London by going through a playoff, Qatar is expected to start their best players in hopes of winning against Korea and keeping their Olympic aspirations alive.

Qatar, in fact, arrived in Korea last Tuesday to prepare for tonight’s match. The two sides drew 1-1 in their previous encounter last November.

“Qatar has prepared thoroughly to take second place and they will have a do-or-die mindset for this match,” Hong said. “We didn’t have enough time to train, but since many players have played together before, we’ll be fine.”

Hong announced his 22-man squad for the Qatar match last week. Players in Japan’s J-League who have been core members of the Olympic campaign thus far - including Kim Bo-kyung (Cerezo Osaka), Baek Sung-dong (Jubilo Iwata) and Kim Young-kwon (Omiya Ardija) - were excluded from the roster, while domestic K-League players will fill their void.

More than five new players have joined the team since the 3-0 win against Oman.

Some pundits speculate Hong will use the Qatar match as a test to find new players, but the former U-20 national team coach said tonight’s match is not a stage to implement new tactics and evaluate new faces.

“It’s not right to conduct an experiment with new players just because this is the final qualifying match,” Hong said. “That test has been conducted last September.”

Hong has been emphasizing that he always sends players who are in top form. Since only 18 players are allowed to enter the Summer Games, meaning some key players from previous qualifiers will not be competing for gold, Hong is expected to use this match to spark competitiveness among players.

“I gathered all the players who have potential,” Hong said. “I want each player to be a multipositioned player who can play at least one or two different positions.”

Players also expressed confidence in performing well in front of their home crowd.

“The competition to be a regular member is still going on,” goalkeeper Lee Beom-young said on Monday. “We will concentrate to win this match even if we have qualified for the Olympics.”