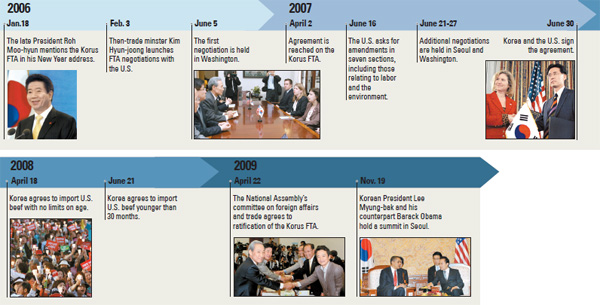 The long-awaited bilateral trade pact between Korea and the United States will be enforced from midnight tonight, but the political controversy surrounding the deal remains largely unabated, with the investor-state dispute settlement (ISD) issue a particular sticking point.

Korea’s opposition parties and civic groups have been demanding that the contentious ISD clause be removed from the free trade agreement. They claim that allowing foreign investors the right to bring a dispute in Korea to an international arbitration panel will harm local businesses, especially small and mid-sized firms.

After a big political brouhaha and repeated demands from the opposition camp that the government renegotiate some of the sensitive terms they deem unfair, President Lee Myung-bak said he would bring the ISD clause back to the renegotiating table within three months after analyzing its fairness.

Once the trade pact goes into effect, the U.S. has agreed to Korea’s request to set up a committee on service and investment within 90 days and bring the issue to the renegotiating table based on a joint bilateral study. 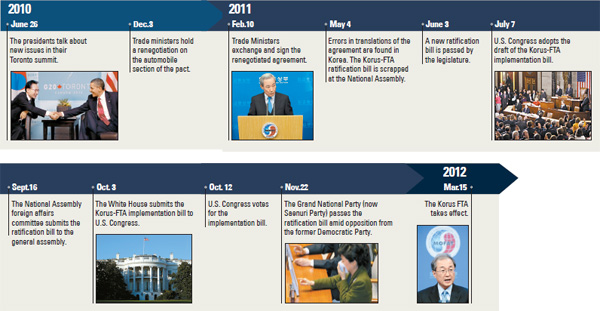 Meanwhile, a coalition led by the main opposition Democratic United Party is continuing to threaten to scrap the deal if it wins the presidential election in December.

While moving to appease the opposition camp, as well as civic groups that say the ISD clause must be removed from the deal as it threatens Korea’s judicial sovereignty, President Lee Myung-bak remains a strong advocate of the contentious clause, which he sees as a safeguard for both Korean and offshore investors here.

“The government is not considering scrapping the [ISD] clause, because providing a safeguard is necessary when attracting foreign investors,” said Choi Seok-young, the deputy minister for trade.

Meanwhile, representatives of the local agriculture industry are worried that their businesses will be negatively affected by the trade deal due to an influx of U.S. goods at cheaper prices.

The farming and fisheries sectors are expected to be among the hardest hit. Studies have shown that the agriculture industry’s trade deficit with the U.S. will increase by $424 million on average per year over the next 15 years. The deficit gap will also widen for the fisheries industry by an annual average of $11 million, the studies suggest.

As part of efforts to support local industries that will potentially suffer from the trade deal, the government came up with a supplementary measure in 2007 that includes providing farmers and fisheries with a total of 21.1 trillion won ($18.8 billion). This sum was later increased to 24.1 trillion won as the National Assembly demanded there be additional measures to minimize the impact of the deal on those sectors considered most vulnerable.

The money will be funneled into investment projects such as upgrading facilities and equipment and providing subsidies over a six-year period.

The Ministry of Strategy and Finance also introduced a tax support plan worth 29.8 trillion won, taking the total amount of financial support for the agriculture and fisheries industries to 53.9 trillion won.

“There are concerns that the trade pact will offer bigger opportunities to large manufacturing companies, but not so many benefits for small businesses and those in the agriculture industries, which will further widen the growth gap between the two,” said Choi Won-mok, a law professor at Ewha Womans University.

“However, this is one of the costs of the Korus FTA. In order to secure enough budget to support industries [that will otherwise get left behind], Korea must continue to liberalize trade, as this process of opening up will grow the nation’s GDP. This wealth can then be redistributed fairly.”

As Korea wraps up the Korus FTA, it will now focus on accelerating negotiations on six bilateral trade deals with countries including Turkey, Australia and Canada, as well as another with the six-member Gulf Cooperation Council.

Seoul is also expected to work out a similar deal with Columbia this year, but talks with Australia and Canada have slowed down due to sensitive issues such as beef. Beijing agreed in January to begin preliminary talks on an FTA with Seoul soon.