At end of world tour, JYJ captivates in Chile

At end of world tour, JYJ captivates in Chile 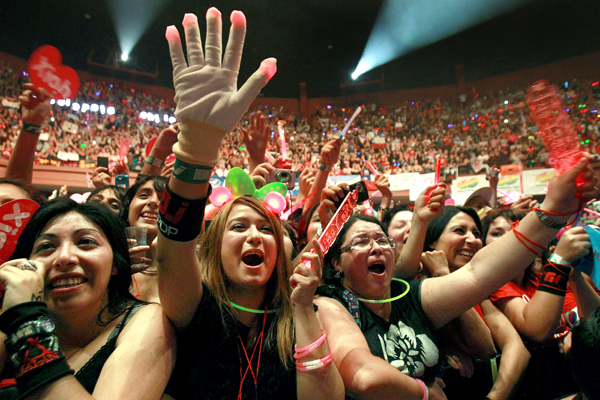 Fans cheer on K-pop group JYJ during the group’s concert at the Teatro Caupolican in Santiago, Chile, last Friday. Provided by CJeS Entertainment

SANTIAGO, Chile - The Teatro Caupolican in Santiago was packed with screaming fans from all over Chile and abroad, cheering on K-pop group JYJ last Friday. 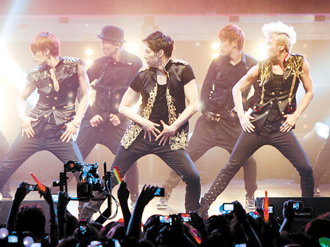 As the crowd shouted, “La colita [Shake your booty]! La colita!” the three members of JYJ - Jae-joong, Yu-chun and Jun-su - turned around and did a short booty dance in response.

“It is amazing that JYJ is in Chile performing and also amazing that you guys even know about us,” said Yu-chun. “After receiving such great enthusiasm from you all this time, I don’t think we can exclude Chile from any future world tours.”

The concert was a first, not only for the group, but for any Korean pop group to perform as a solo act in Chile.

“The members of JYJ are the first Korean artists to hold a solo concert in these parts of the world and also the first Korean act to complete a world tour of this scale,” CJeS Entertainment said in a press release.

The 3,000 available seats at the Teatro Caupolican were sold out for last Friday’s concert. Fans wore red T-shirts, for JYJ’s official color, and many were wearing handkerchiefs decorated with the Korean flag on their wrists. Signs reading, “I will keep you safe Jae-joong” and “Will you marry me?” in Korean could be seen amidst fans yelling out, “Mi hijito rico [My love].”

During the show, JYJ performed hit songs including “AYYY Girl,” “In Heaven” and “Get Out,” as fans from around the world sang along in English and Korean.

The concert went on for an hour and 50 minutes, but the crowd was reluctant to leave the stadium even after it was over.

Camelia Rodriguez, 19, who is a member of two JYJ fan clubs in Chile, including JYJ Chile and Cassiopeia Chile, said that she was almost in tears to see JYJ perform, after waiting to see them live for more than seven years.

Ana Maria, 54, said that she became a JYJ fan six years ago when her 19-year-old daughter, who accompanied her at the concert, introduced her to the group.

“JYJ is a fantastic group, and the members have beautiful voices and sing and dance really well,” she said, adding that in her opinion, there is no pop act that can compare with JYJ.

To secure good seats at the stadium, some hardcore fans even camped outside the venue starting last Monday.

Andrea Briceno, 19, said she had saved up all her money from doing part-time jobs in order to fly 10 hours from Sweden to Chile, just to see JYJ in person.

“My dream is to sing with JYJ before I die,” she said.

Another 19-year-old, Carolina, said she came to the concert in Chile with two other friends from Bolivia and that she gets a sense of hope whenever she watches JYJ concert footage.

“It is like a dream to see them perform in real life instead of through the Internet,” she said.

JYJ’s world tour, which started last April, has been a hot success.

Besides the sold-out concert in Santiago, its concert in Lima, Peru, the last city on the group’s world tour, was sold out as well. And with requests from fans pouring in for more seats, the organizers sold an extra 1,000 tickets on top of the original 5,000 available.

The tour was attended by more than 200,000 fans, and the band played an average of 18 songs per concert.