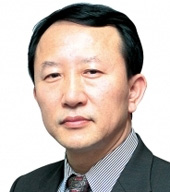 Hynix Semiconductor expects to benefit from its Japanese rival Elpida Memory having filed for bankruptcy last month, it said yesterday.

“Elpida’s bankruptcy filing, as well as the fact that many smaller memory chipmakers are suffering financial hardships, gives Korean chipmakers an opportunity to step up their market stature and influence,” said Kown Oh-chul, the president and CEO of the world’s second-largest computer memory chip producer, at a press conference.

It will take “considerable time for Elpida to recover,” he added.

The press conference was the first held since SK Telecom, the country’s No. 1 mobile service carrier, acquired the chipmaker on Feb. 14.

“It is true that our customers fear there will be an overall reduction in the supply of memory chips in the wake of Elpida’s filing,” said Kwon. “We have also received requests for additional supplies from our customers.”

Samsung Electronics controlled 38 percent of the dynamic random-access memory (DRAM) market by revenue last year, while Hynix and Elpida held 25 percent and 18 percent, respectively, according to market data. DRAM is a kind of PC memory chip.

The CEO expressed hope that DRAM prices would rebound in the second half of the year, given that prices have dipped unusually low, but the recovery will be depend on the currently volatile global economy and other market variables, he said.

Analysts have been upbeat recently about the industry’s prospects.

“Hynix prices have risen quickly,” said Seo Won-suk, an analyst at Korea Investment & Securities, in a report last week. “The rising momentum is expected to continue given that the company is expected to swing back into the black in the second quarter, with its performance forecast to improve in the second half.”

Hynix reported its second consecutive quarterly loss last month, and Seo adjusted its target share price from 30,000 won ($26.7) to 36,000 won. Hynix shares closed down 1.01 percent at 29,300 won yesterday. Also, Hynix reiterated the importance of aggressively boosting its NAND flash memory business, a plan it announced last month. Hynix controlled between 11 and 12 percent of the global market for NAND chips in the fourth quarter to rank fourth.

Kwon said the company will set aside over 55 percent of this year’s annual budget of 4.2 trillion won annual budget for its NAND business.