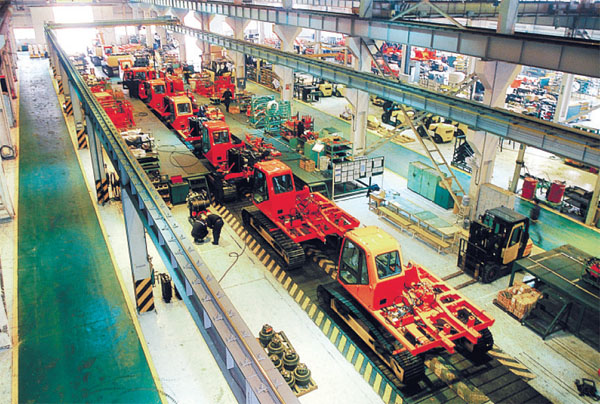 To become one of the global top three and reinforce its global competitiveness, Doosan Infracore is investing aggressively. In particular, the company is planning to focus on production facility investments in China and Brazil, emerging markets that have shown rapid development speed.

In October 2011, Doosan Infracore completed a small excavator factory that can build 9,800 excavators a year in Suzhou, Jiangsu province, China. The company plans to increase its annual production to 13,600 by 2015. As the Suzhou factory has been finished and another factory in Yantai is producing middle- and large-sized excavators, the company has now positioned itself to fulfill a stable and increasing demand for small excavators in the country.

Doosan Infracore also has high hopes for a diesel engine factory it is constructing in conjunction with XCMG of China. The company is planning to start with construction-work diesel engines before expanding its business to generator and truck engines.

Doosan Infracore’s machine tool division, which raised the highest sales last year, is currently working to secure detailed, high speed and key technologies while focusing to improve the overall quality of its products. It plans to further increase its market portion in China through local marketing, product support and reinforcing development ability.

Doosan Infracore is aiming to complete an excavator factory by the second half of this year to advance to the Brazilian market, the largest construction facility market in South America. Brazil is the host of the 2014 World Cup and the 2016 Summer Olympics, so it is preparing a number of large projects. The markets for high-speed railroad, highway infrastructure, hydroelectric power generating plants and construction materials are expected to grow sharply.

The Brazil factory can produce 1,500 excavators a year. With a company investment of $60 million as well as plenty of aggressive marketing, it aims to expand the scale to 2,500 a year. The company plans to focus mainly on producing 22-ton excavators.

Once the Brazil factory is completed, Doosan Infracore is expecting its logistical costs to reduce and product competitiveness to increase.