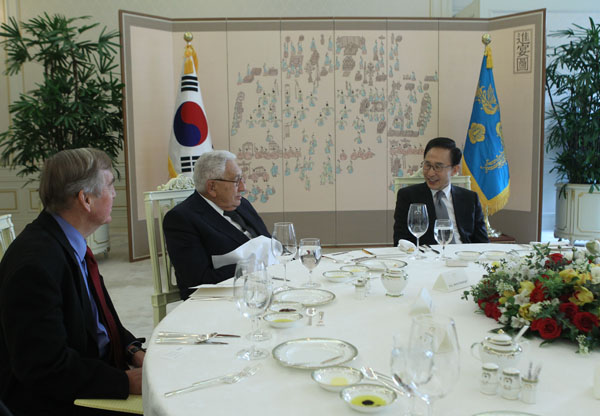 With less than two weeks left before the opening of the nuclear summit in Seoul, President Lee Myung-bak yesterday met and exchanged opinions with global experts to successfully host the event.

Henry Kissinger, former U.S. secretary of state, Graham Allison, a proliferation expert at Harvard University and Igor Ivanov, former Russian foreign minister, are all members of Lee’s 15-member Eminent Persons Group. At the Blue House luncheon yesterday, the experts met with Lee and briefed him on their opinions.

The Eminent Persons Group aims to provide Lee with policy recommendations and advice in preparation for the second Nuclear Security Summit scheduled for March 26 and 27 at COEX, southern Seoul. Initiated by U.S. President Barack Obama in April 2010, the first summit took place in Washington.

At the meeting, President Lee expressed his strong wish for the Seoul summit to achieve a concrete outcome. “The first summit in Washington had a symbolic meaning as a new beginning,” Lee was quoted as saying by his spokeswoman Lee Mi-yon. “At the Seoul summit, it is important for participating countries to declare their voluntary efforts to reduce highly enriched uranium and talk about specific cooperation measures to prevent proliferation of nuclear materials and to secure technology for safe management.”

Allison stressed at the meeting that implementation of the nuclear safeguard measures is extremely important, and Lee replied that he expects to see more advanced safeguards to be agreed upon at the summit.

Nearly 60 leaders from around the world will attend the country’s biggest international event, including heads of states from 43 countries and leaders of four international organizations. Ten countries, including France and Germany, will send high-ranking officials. The participants will discuss cooperative measures to combat the threat of nuclear terrorism, protection of nuclear materials and related facilities and prevention of illicit trafficking of nuclear materials.

According to the preparation committee, the leaders will adopt the Seoul Communique to spell out their agreements on improved nuclear security and measures to prevent nuclear terrorism. The most important agenda that Seoul seeks to include in the Seoul Communique is the efforts to remove or minimize civilian use of the highly enriched uranium in order to prevent the proliferation of the materials to terrorists.