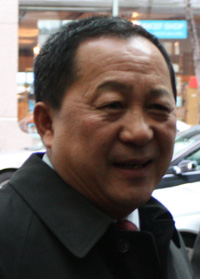 NEW YORK - North Korea’s Vice Foreign Minister Ri Yong-ho said that UN nuclear watchdog inspectors will soon visit the regime and monitor suspension of its nuclear program as promised at the recent aid-for-denuclearization agreement with the United States, a positive sign of a thaw in the frosty relations between the two countries.

Ri, who is now on his business trip to New York, was approached by reporters in front of the Millennium UN Plaza Hotel in New York City on Monday, and asked when the International Atomic Energy Agency (IAEA) inspectors will be allowed to access the regime’s uranium enrichment facility in Yongbyon, following the bilateral deal with the United States that was hammered out in Beijing.

In the deal, the regime agreed to curb its nuclear program in exchange for 240,000 metric tons of nutritional aid.

“I think [the IAEA inspection] will happen in the upcoming days,” Ri said. “Concrete steps are being taken to carry out the DPRK-U.S. agreement made in February.

“If the United States wants to improve relations [with us], we are willing to accept the move,” he emphasized. “Ending the hostile relationship with the United States is the most important thing for us. This is the beginning point and basis for resolving all other problems.”

However, when it comes to restarting a long-stalled dialogue with the South, Ri said, “The problem is whether the South has an intention to implement the June 15 Joint Declaration and Oct. 4 Declaration, but I don’t think the South is willing to do it.”

Ri repeatedly stressed the importance of carrying out the two inter-Korean agreements, both of which were made with former presidents Kim Dae-jung and Roh Moo-hyun, as a precondition for resuming inter-Korean talks.

“If the South respects these declarations and has intentions to implement them, we are eager to hold their hands and go together,” Ri said.

“The meetings went well. Plenty of opinions were exchanged,” Ri said. “I am satisfied with the result of the meeting.”

However, Ri dismissed the report from Japanese media that North Korea and the United States had determined to open liaison offices each in Pyongyang and Washington.

“Nothing has been proposed,” Ri said.

When it comes to the allegations that young heir Kim Jong-un reportedly expressed intentions to visit the UN headquarters, Ri refused to respond, saying “I’m not in a position to talk about his intentions.”