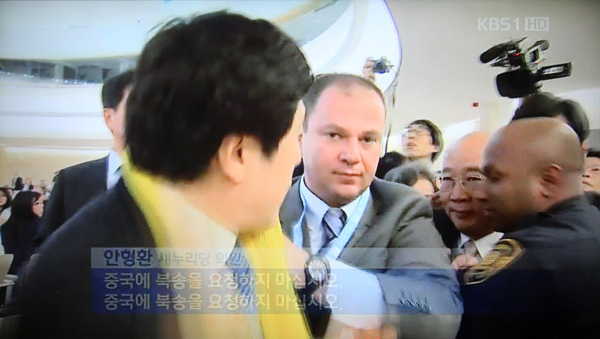 GENEVA - South Korean lawmakers who attended a UN meeting in Geneva to raise international awareness of the forceful repatriation of North Korean defectors scuffled with delegates from the North during the meeting.

At a session of the UN Human Rights Council on Monday, Marzuki Darusman, the UN’s special rapporteur on human rights in North Korea, gave his report on the current human rights situation to about 500 delegates from all over the world.

Darusman indicated that North Koreans arrested by Chinese authorities and sent back to the regime face harsh punishment in forced labor camps, or could become victims of torture or open execution.

Darusman urged the international community to honor their international obligation to provide protection to those seeking asylum who will undergo persecution or serious harm in their homeland if sent back.

Park Sun-young, one of three South Korean lawmakers who attended the meeting, also raised her voice on the issue.

She had been on a hunger strike for 11 days to protest Chinese action.

“Since this month, North Korean authorities have arrested a bunch of the escapees’ families left in the country and reportedly imprisoned them at 20 political prisons near their houses,” she said.

“Although I don’t have an exact number, I was told that there are approximately 100 family members in the prisons. Several days before, North Korean authorities arrested a family living in North Hamgyong Province and brutally beat a 3-year-old child to death.”

So Se-pyong, North Korean ambassador to the UN in Geneva, flatly denied the testimonies, calling them “a political ploy full of unfounded and irrational allegations fabricated and spread by hostile forces.” After the brief comment, So was seen trying to exit the meeting room.

Lee said “Don’t repress the defectors,” and Park shouted “No repatriation to the North. It would lead them to their deaths .?.?.”

Ahn and Lee grabbed So’s arm to block him from getting out of the room. But a group of North Korean delegates near So pushed them away, and Lee fell down and hurt her wrist. The UN security guards blocked the lawmakers from So and let him leave.

Lee told a Yonhap News Agency reporter that “a man who looks like a North Korean delegate kicked my feet and twisted my wrist.” Lee was treated at a UN medical center afterwards.

Ahn and Lee were expelled from the meeting room by UN security guards. They were accused of “physically threatening” So by grabbing his arm. But they continued to shout the phrase “Save North Korean refugees” outside the meeting room.

After the meeting, former National Assembly Speaker Kim Hyong-o, who was accompanied by three lawmakers, and Park convened a press conference demanding an apology from North Korean delegates for “violence on female lawmaker [Lee].” They also urged China to grant refugee status to North Korean defectors.

Given previous cases, observers say it is very unusual for such a physical clash among delegates to break out during a UN meeting.

At the session, Park Sang-ki, the South Korean ambassador to Switzerland and permanent representative of the Republic of Korea to the United Nations in Geneva, also sought help to protect North Korean defectors.

But the representative of the Chinese delegates reiterated his appeal and said the North Korean defectors are not refugees but “illegal immigrants,” and the Chinese government is “cautiously dealing with the matter according to international and domestic laws.”