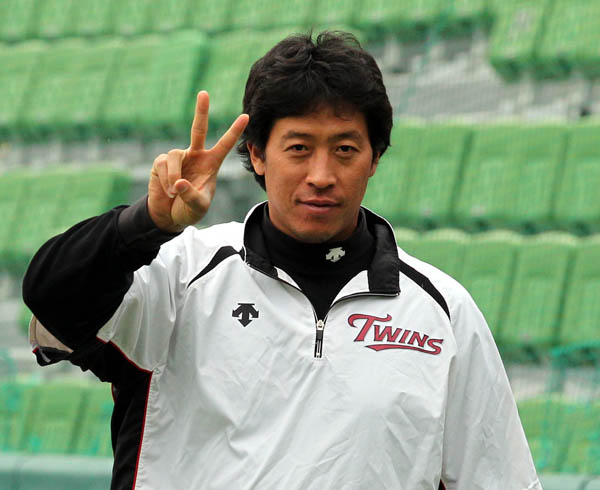 
Before the 2012 Korea Baseball Organization season kicks off, the Seoul LG Twins will have to regroup and move past the match-fixing allegations that have already seen two of its pitchers, including ace Park Hyun-jun, expelled from the ball club. 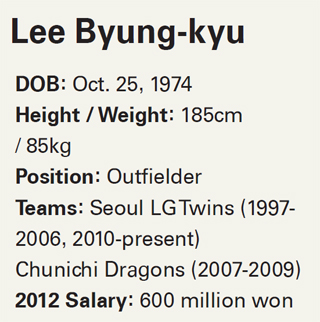 Lee Byung-kyu, who was named the Twins’ captain in January, says he has helped keep the team’s spirit intact through the tumultuous times. Even new manager Kim Ki-tae has thanked the 38-year-old veteran for his efforts in the locker room.

Lee has been a Twin through and through. Since making his professional debut in 1997, the season he won the Rookie of the Year award, the outfielder hasn’t played with any other KBO club. Aside from a three-season stint with Japan’s Chunichi Dragons, Lee has taken the field in a Twin jersey his whole career.

The left-handed batter is considered to be one of the most respected hitters in the KBO. He finished four seasons with the most hits while winning six Golden Glove awards, the most for an outfielder. His career batting average stands at .313.

With the national team, Lee helped Korea win gold medals at the 1998 and 2002 Asian Games while collecting bronze in the 2000 Olympics and 2006 World Baseball Classic.

In an interview with Ilgan Sports, the JoongAng Ilbo’s sports daily, Lee said he will now focus more on teamwork as a veteran player. And as a captain, he hopes his team will overcome its current distractions and make it to the postseason.

Q.How would you rate the team’s performance during spring training?

A. I think we’ve created a good atmosphere. I see many players who have a strong desire to be regular members and are eager to perform well. Whether they’re rookies or existing players or free-agent pickups, everyone is putting their best efforts forward. Overall, I feel our defense has gotten stronger, and that’s a positive thing.

Your team must be facing a difficult situation with the match-fixing scandal.

It feels bad that those players are now out and I feel sorry for them as a veteran. I didn’t know those players were in that kind of a situation .?.?. I couldn’t even help them. Unfortunately, they are not our players anymore. I told other players that we should concentrate more on baseball so that we can move on and prevent further disturbances within our squad.

You previously said you want to make a “rock solid team.” Did you achieve that goal during spring training?

It’s gotten a little better. You know, it doesn’t always turn out as I say it will. What’s important is that each player has a strong mindset to boost unity, and I think they are all trying hard.

Every player in the locker room has said you are leading the team well. What do you think?

I haven’t done much. I just help our young players to focus only on baseball. I think players have been following me well, and what’s important is what happens from this point on. When players enter the preseason games, they will be more stressed and feel fatigued. It’s an important period so I will emphasize a strong mentality and attitude and make them more concentrated on baseball.

You were seen scolding players after the game against the Yomiuri Giants last month. Why?

That was the first time I had played in a competitive game this season. Since I haven’t been playing, I thought other players were doing fine, but I just saw some players were being lazy. You know we’re not the top team. I asked players not to show that poor attitude again and I think they’ve been better since. That was the last time I scolded them.

What do you think about critics calling the Twins a weak team?

I already know many fans are talking that way. I think it hurts the pride of our players since we’ve it heard so many times. I know we’re in the bottom cellar and there is no room to fall. I told players that the only thing left for us is to improve and to always have the LG Twins pride on our minds.