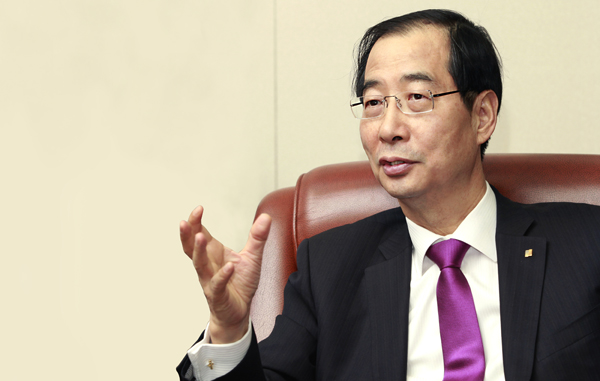 
‘[U.S. officials] regularly read the Korea JoongAng Daily and use it as a major information source on Korea.’

The investor-state dispute settlement (ISD) clause, a controversial sticking point in the free trade agreement between Korea and the U.S. that went into effect at midnight, will contribute more to economic growth than hamper local business interests, according to Han Duk-soo, the new chairman of the Korea International Trade Association (KITA).

“The ISD clause is a guarantee certificate for larger foreign investments that will eventually lead to the creation of new jobs,” Han said during an exclusive interview with the Korea JoongAng Daily earlier this week.

Nicknamed “Mr. Free Trade,” Han masterminded the Korus FTA as the finance minister under the Roh Moo-hyun administration, and continued leading talks under the incumbent Lee Myung-bak administration until he stepped as down as Korea’s ambassador to Washington last month.

In a one-hour interview with Kim Tae-jin, head of the business and industry desk at the Korea JoongAng Daily, Han said that almost every country except for North Korea is moving towards liberalizing trade in a bid to be more globally competitive. He described those who oppose it as adopting a “defeatist attitude.”

Below is the interview in full that took place between Kim and Han at the KITA headquarters in southern Seoul.


Q. Were you expecting any problems with the ISD clause when you negotiated the Korus FTA?

A. The ISD clause has become [a contentious issue with the public], even though there are no problems with it. It is a very technical term. Each argument made by those who oppose it has been clearly [proven to be groundless]. Some people have said that if U.S. businesses file lawsuits in overseas countries in which they have invested using the ISD clause, the U.S. firms will definitely win. This is absurd. In fact, there have been 300 ISD-related cases as of 2010, and in 22 of [the 100 that have been decided], the U.S. companies lost.

Others argue that including the ISD clause in the Korus FTA is tantamount to Korea surrendering its sovereignty. This is also ridiculous. There are about 3,000 trade agreements that include the clause worldwide. As Korea makes so many investments abroad, the benefits we will earn from the ISD clause will outweigh those that the U.S. can expect. Korea has made significantly more investments in the U.S. than vice versa.

When we were negotiating the clause, we discussed it very carefully and considered whether any part of it could prove to be unfair. Unless the government favors foreign businesses and investors for reasons that are in themselves unfair, the ISD clause will serve as a safeguard for Korea. As far as I know, our central government works in favor of our people, not for foreigners. There is no policy that takes sides with foreign businesses in Korea. So the arguments regarding the ISD clause have so far been nothing but irrational.

Politicians and government officials in Washington, including those in the White House and the State Department, regularly read the Korea JoongAng Daily and use it as a major information source on Korea. As such, it is very important that the local media report such sensitive issues accurately in order to avoid misunderstandings, which could create conflicts between the two countries.

Young Korean workers are skeptical about the deal, saying that existing FTAs with the EU and other countries have done nothing to create jobs. What would you like to tell them?

The ISD clause is also needed to create jobs here. What we need to do to add jobs is attract more foreign companies, not just rely on domestic businesses. Conglomerates are increasingly taking strategic approaches to employment. They are less likely to invest much in this area because it is very costly for them to maintain workforces [they no longer need], in terms of both wages and welfare. That is why Korean businesses are building production bases in developing countries [where overall production costs, including labor costs, are relatively cheap.] As a result, we aren’t seeing many more jobs created by Korean businesses. However, they are choosing to go abroad.

What we need to do is make foreign companies come to Korea and hire Korean people. The ISD clause will ensure security for foreign firms, as it makes the domestic business environment easier and safer for them to operate in. This way, Korean businesses will also want to stay in the country.

One of my close acquaintances in the U.S. is Bob King, president of the United Auto Workers Union. King supports the Korus FTA and pursues cooperative relations between labor and management. He believes that the trade union needs to cooperate with management in order to increase production, as this will lead to the creation of more jobs. Korean people need to learn a lesson from his approach and stop criticizing conglomerates for not offering them enough jobs.

What results do you think the Korus FTA will yield compared to the FTA with the EU?

[The positive] effects of the FTA are obvious, as proven in the FTA with the EU. It will take a little time to see what bears fruit, but I think the Korus FTA will bring us many positive benefits. [It has been nine months since the Korea-EU FTA has taken effect.] A recent KITA report showed that Korea’s exports to European countries of products that are subject to the tariff cuts have improved a lot, despite the current euro zone debt crisis. As the economic situation is better in the U.S. than it is in Europe, the Korus FTA will certainly pay off.

By signing FTAs with both the U.S. and the EU, Korea is going to trade with markets that account for 61 percent of the world’s gross domestic product. This will help Korea maintain its growth engine of strong exports. Exports have always served as the engine of the country’s economic growth, and will continue to play a role in driving further growth in the future.

What benefits will the U.S. reap from the Korus FTA?

The U.S. also has many things it wants to sell in Korea. However, when U.S. businesses enter the Korean market, they will have to compete mainly with other foreign players here, not Korean businesses. For example, during the time when U.S. beef imports were suspended, Australian beef replaced U.S. beef, accounting for as much as 75 percent of the local market. But after the imports of U.S. beef resumed, Australian beef started to lose out again. The same thing will happen in the wine market. As for the service and legal industries, the FTAs with the U.S. and EU will help the domestic service industry become more competitive. By being exposed to such advanced markets, Korean businesses in the service industry will start making efforts to improve the quality of service they offer in order to compete with foreign firms.

How will the Korus FTA benefit small businesses?

When the FTA with Chile was being discussed, many people were worried that the deal would threaten the livelihoods of local farmers and wineries. But that turned out to be a false alarm. The Korus FTA will give Korea a huge opportunity. The government and businesses need to join forces to take advantage of this and help small firms reinforce their competitiveness. Competitiveness stems from technological capability. This means that small businesses will have to make more efforts in research and development and enhance their technological abilities. For small businesses, I think it’s important to build a free market for them, which means easing barriers and restrictions. The original purpose of the FTA is to tear down trade barriers to offer businesses free zones. Opening our market gives Korean businesses more opportunities to be free and raise their strengths.