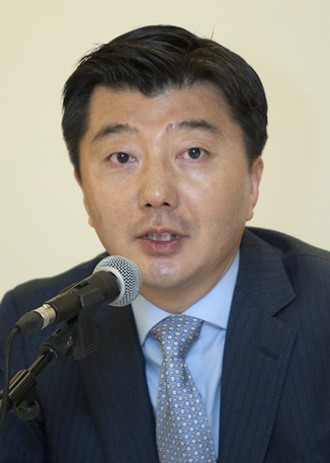 Khang expressed a strong interest in forging strategic partnerships with top-rate Korean businesses and pledged to seek mutual growth with local companies by combining their strengths with GE’s leadership in the global market.

“Our partnership with Hyundai Motor Group is a good example of why we want to make more partnerships with Korean conglomerates,” Khang said.

Hyundai Card and Hyundai Capital, financial units of the country’s largest automotive group, is a 57-43 joint venture between Hyundai Motor Group and GE Capital. The latter has invested $3 billion and has been running the company since 2004.

The two giants collaborated to develop the next generation of eco-friendly automobiles and help consumers finance the purchase of the new vehicles.

Khang said he wants to further capitalize on Korea’s innovative power and pool of exceptional talent.

“In a 2012 survey on the global innovation index by GE, Korea ranked fifth in terms of innovation,” Khang said.

GE Korea will combine the country’s innovation capabilities with GE’s brand power and technological prowess to achieve mutual growth both at home and abroad, Khang added.

Although GE is a multinational company established by inventor Thomas Edison in 1879, most consumers in Korea are unaware of the extent of the company’s reach.

GE Korea operates mainly in four large business areas: health care, energy, aerospace and capital. Since GE is a business-to-business company, it supports Korean companies in the fields aforementioned by providing them with technologies and solutions, Khang said.

GE works with almost every Korean engineering company that operates overseas, accounting for 10 percent of the country’s total exports. The company is currently running a body dubbed the “EPC Center of Excellence” that provides engineering, procurement and construction firms with solutions.

The new CEO of GE Korea highlighted one of the companies core ideas: globalization. Paradoxically, globalization means localization to GE, he said.

“Chairman Immelt puts much emphasis on globalization, but it is not what the word literally means,” he said.

“The chairman says it is crucial to root in as an important entity in the local market.

“In other words, we pursue growth through localization, which ultimately leads to mutual growth with Korean businesses.”