Obama to tour the Demilitarized Zone

Obama to tour the Demilitarized Zone 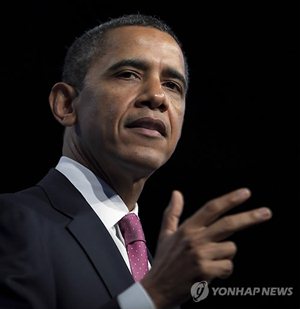 WASHINGTON - The White House indicated Tuesday that President Barack Obama will tour the Demilitarized Zone, which separates the two Koreas, during his visit to South Korea later this month.

“A visit to the DMZ would be reflective of the president’s commitment to both security on the Korean Peninsula and the need for North Korea to live up to its international obligations, give up its nuclear weapons program and return to the community of nations,” White House Press Secretary Jay Carney said at a press briefing.

He was responding to a news report that Obama is expected to visit the DMZ when he travels to the South to attend the second Nuclear Security Summit March 26-27.

It would be Obama’s third visit to South Korea, a key Asian ally, since his inauguration in 2009.

But Carney evaded a question on whether Obama will deliver a key message to North Korea during his possible trip to the DMZ, heavily fortified by the militaries of the two Koreas, still technically at war.

Their 1950-53 Korean War ended in an armistice, not a formal peace treaty.

Ronald Reagan, Bill Clinton and George W. Bush all visited the DMZ while in office.