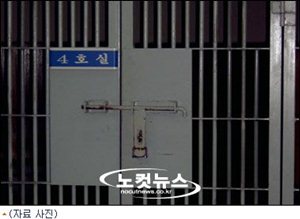 Foreigners who are found to be in the country illegally and bound for deportation are detained in an immigration detention center until their exit documents are ready, and in the process may be subjected to humiliation and fundamental human rights violations.

There were reported instances of menstruating women detained in the immigration detention centers not being allowed to use the restroom, as well as inspections where detainees were stripped completely naked.

One man was taken to the center on a bus and requested to use the bathroom but was denied. He went in his pants, seated. Another man was punched in the face and side, and then promptly handcuffed.

“The immigrations officer was dressed in regular clothes and didn’t even offer identification,” the man said.

Others recall not being given a change of clothes for over two weeks.

In a survey of 412 foreigners at these immigration detentions conducted by the commission between July 20-29, 2010, 36.7 percent replied that the full-body search in the process of being admitted to the immigrations centers was a “humiliating process.”

Meanwhile, 80 people, or 29.9 percent of those surveyed, revealed they were subjected to racial discrimination, verbal abuse and other violations of human rights.

Especially in the case of the Incheon International Airport Immigration Office and the Yeosu Immigration Office where initial inspection of illegal sojourners is carried out, 41 percent admitted to feeling “sexually humiliated” in the process.

Some 18.3 percent, or 75 detained women surveyed, said they felt “sexual humiliation when transported to the immigration detention center.” When questioned which part was sexually humiliating, 27.8 percent answered, “as soon as getting out of the car, being tied together with men and dragged along in front of everybody.” Meanwhile, 24.4 percent answered, “not being able to go to the restroom for hours.” Another 14.6 percent answered “being stuck in a crowded car with men for many hours.”

Once these detainees arrived in the immigration detention centers, they were forced to wear clothing provided by the center, and 44.2 percent reported receiving “smelly clothes” while 34.5 percent said “the clothes were so dirty, I couldn’t change into them.” Some 18.8 percent found the clothes didn’t absorb sweat well so their “body was itchy.”

A spokesman of the Human Rights Commission stated, “The immigration detention centers need to take measures in order to prevent foreigners from feeling shame and humiliation in the process when they are detained or given body inspections.”

“Especially in cases when they are trapped in the car and cannot go to the restroom,” the spokesman said, “this is a serious infringement of human dignity and immediate reformatory measures are needed.”