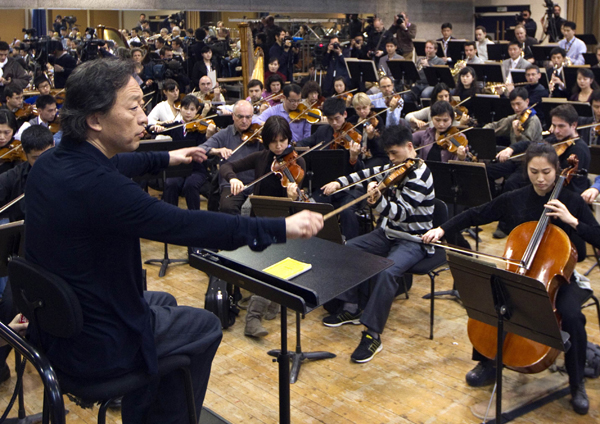 South Korean maestro Chung Myung-whun, left, music director of the Radio France Philharmonic Orchestra, conducts a rehearsal with North Korea’s Unhasu Orchestra in Paris on Tuesday. Chung has invited the North Korean orchestra for a joint concert with the Radio France Philharmonic Orchestra in Paris on Wednesday. After arriving on Saturday, the North Korean delegation, including 70 members of the Unhasu Orchestra, toured the Palace of Versailles and the Louvre Museum, according to an official with the French orchestra that invited the North Koreans. Chung had unsuccessfully pushed for staging an inter-Korean concert due to lingering political tensions over the North’s two deadly attacks on the South in 2010. North Korea and France do not have formal diplomatic relations, but France opened an office in Pyongyang last year to foster cultural exchanges. [REUTERS/YONHAP]