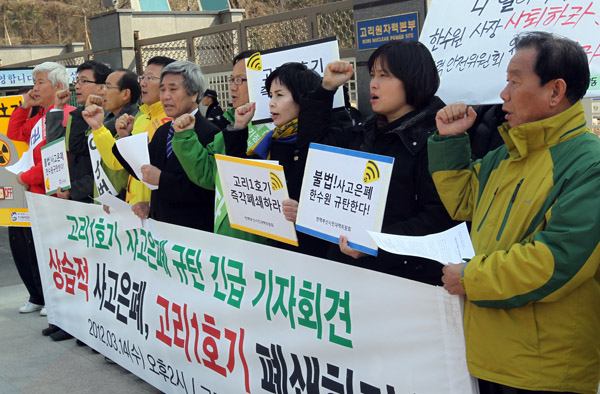 Anti-nuclear activists stage a rally yesterday in front of the Gori-1 nuclear reactor in Gijang County, Busan, to urge the government to shut down the country’s oldest reactor. [YONHAP]

With increasing calls from the public for a clear explanation of why the country’s oldest reactor in Busan went powerless for more than 10 minutes last month, safety inspectors continued their on-site investigation into the incident yesterday. 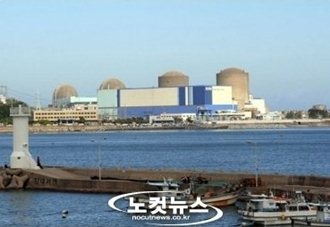 The first area the officials from the Nuclear Safety and Security Commission and technicians from Korea Hydro & Nuclear Power inspected was the diesel generator on the first floor of a building next to the Gori-1 reactor.

It was revealed on Tuesday that the Gori-1 reactor was found to have lost power on Feb. 9 when the operator was conducting a month-long safety check. Due to the loss of power supply to the reactor, important facilities, such as those that store spent fuel and cooling water, were temporarily shut down.

Yesterday, the inspection team also made a checklist of other electric power systems inside the Gori-1 reactor that could have triggered the power to go off.

The inspection team, however, notes that even if the diesel generator works, it doesn’t mean that the generator is without fault, because at the time of the incident, the generator failed to provide electricity to the reactor’s facilities, and the team’s role is to find out why it didn’t work.

Today, the inspection team will also conduct a check of the protective relays by re-enacting the incident.

“We are also investigating related officials that tried to hide this incident,” said Eom Jae-shik, an official from the commission. “We’re not sure how long the investigation will proceed, but it will go on until the cause of the power supply loss is revealed.”

Amidst the ongoing inspection, in response to the tardy report on Tuesday that the country’s oldest nuclear reactor had gone temporarily powerless, civic groups and environmentalists yesterday protested against the government’s persistent move to extend the operational life of the Gori-1 reactor.

The Gori-1 reactor, Korea’s first commercial power provider, was built in 1978. Though the life of the reactor is limited to 30 years, the government gave the green light to extend its operational use for 10 years in 2008.

Members of the No Nukes Busan Citizen Countermeasure Commission yesterday held an urgent press conference in front of the Gori Nuclear Power Plant in Gijang County, Busan, and urged the government to take responsibility for the 12-minute blackout on Feb. 9, which allowed important facilities, such as the spent fuel and cooling water storage areas, to temporarily go out of order.

“It was fortunate that the power inside the reactor recovered in 12 minutes, but if things had gotten more serious, the incident could have resulted in a tragedy like the one witnessed at the Fukushima plant [in Japan last year],” said Seo To-deok, an official from the commission.