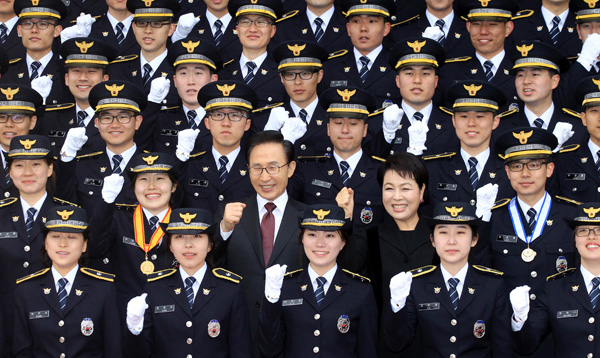 President Lee Myung-bak, second from left in the second row, and his wife Kim Yoon-ok, third from left, pose with graduates of the Korean National Police University yesterday at a ceremony in Yongin, Gyeonggi. By Ahn Seong-sik


The conflict between police and prosecutors over which has jurisdiction over an ongoing criminal investigation flared again yesterday as the Seoul Central Prosecutors’ Office ordered the National Police Agency to transfer a case back to its local agency after the NPA had already declared it would take over the investigation.

In the case, a Milyang Police Precinct officer surnamed Jeong, 30, accused a prosecutor with the Changwon District Prosecutors’ Office surnamed Park, 37, of abuse of power in ordering the halt of an ongoing investigation.

“We’re sticking to the law,” a spokesman for the Seoul Central Prosecutors’ Office said at a press conference Tuesday. “The case should be handled in the region where it occurred. It is clear that the plaintiff, defendants and witnesses are in Milyang, South Gyeongsang.”

The prosecutors said that the decision to transfer the case was made based on a line in the Criminal Procedure Code that says, “Territorial jurisdiction for a case is determined based on the address of the plaintiff and the defendant.”

Jeong alleges that Park told him last November not to expand an investigation into a waste disposal corporation suspected of burying industrial sludge in rice fields because the case was attracting the attention of authorities in the prosecution.

Jeong said that Park had changed his attitude about the case after recognizing that the attorney the corporation had hired was a former prosecutor with the Changwon District Prosecutors’ Office, and the corporation’s CEO also had many connections with several high-ranking authorities in Changwon.

Although local police tried to press forward with the case, they were again told to follow orders.

“We strongly suspect we know why the prosecution transferred the case,” an NPA spokesman said. “They [prosecutors] know that we handle many criminal cases regardless of where the crime happened.”

The spokesman added that NPA agencies for cybercrime and intelligence run national investigations, adding that the Milyang case was assigned to the NPA’s intelligence agency by NPA Commissioner Cho Hyun-oh last week.

“We’re going to arrest all corrupt prosecutors and I suggest the prosecutors do the same thing to the police,” Cho said. “It will eventually manage these two investigation agencies transparently.”

Meanwhile, the Blue House has expressed its displeasure with the wrangling between the two.

In a speech at the Korean National Police University graduation ceremony, President Lee Myung-bak said that now that the police have won the right to open their own investigations, they “need to serve the people with a more mature attitude.”

Lee also urged the police to have a strong sense of responsibility and ethics and urged them to respect human rights.