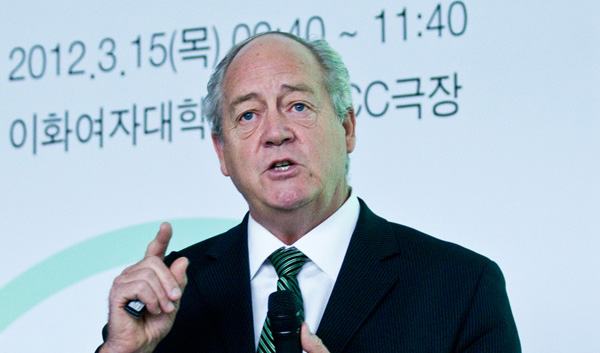 
The 12-minute power outage that stalled a reactor in the Gori nuclear power plant in South Gyeongsang is not as much of a problem as the attempt to conceal it, according to Greenpeace co-founder Patrick Moore, a devoted advocate of nuclear energy.

Nuclear energy is the safest energy source in the planet, and the most realistic, he said, citing his belief that renewable energies like wind and solar power cannot replace oil and coal because they are not consistent enough to run schools and plants.

Moore spoke with the Korea JoongAng Daily prior to giving a lecture at Seoul’s Ewha Womans University yesterday. He said he learned of the Feb. 9 debacle at the Gori-1 reactor, which was caused by an external electricity supply rather than by a problem with the reactor itself, through local media.

“The reactor stopped operating for only 12 minutes, so it was not a big problem,” Moore said. “If the electricity supply stops for longer, the backup system was supposed to initiate, but the reactor was restored even before that.”

He downplayed the importance of the mistake that led to the outage, but was critical of the response that followed.

“Accidents can happen. This was not even an ‘accident,’ but more like an ‘incident,’?” he said. “However, the fact that they tried to conceal it was a problem. Transparency is the key in running nuclear reactors.”

Despite the risks posed by nuclear power, which was exemplified by the catastrophe at the Fukushima Daiichi plant in Japan one year ago, nothing can realistically replace it, he said.

Moore drew attention to the fact that there were no casualties despite the dangerous situation at the Fukushima plant. Similarly, no one died on Three Mile Island in 1979 when the U.S. experienced the worst nuclear disaster in its history. This, he said, was significantly different from what happened in Chernobyl at a time when Moscow was living dangerously, and perhaps recklessly.

“The Fukushima accident was a meltdown accident, but the Chernobyl accident was an explosion of the reactor core. It is not the same, because the Soviet Union during the cold war used a shortcut to produce power.”

“Two million people die prematurely from the use of fossil fuel-based energy and pollution every year,” he said. “In 1970, 26,000 people died or were injured because of a hydropower plant accident in China. In Russia, 79 people died from a similar accident in 2009. Every year, 3,000 to 5,000 coal miners lose their lives.”

Moore said renewable energy sources such as wind and solar power cannot be considered alternatives because they are unreliable and too expensive.

“One day, wind power supplies 12 megawatts of electricity, and the next, there is nothing. Then, we have to fill in the gap. Wind energy cannot run schools and factories because it stops all time,” he said. “Solar power is much more expensive. It is the most expensive form of electricity.

“Germany is drastically reducing subsidies for solar panels. Rich countries can continue to invest in solar energy - if they can waste tax money,” he said.

Moore left Greenpeace in 1986, and the irony of this once-fierce environmentalist becoming a strong supporter of nuclear energy is not lost on him. He once described it as the worst invention in the world; nowadays, he can’t stop singing its praises and accuses Greenpeace of fearmongering.

“We included nuclear energy in the same category with nuclear weapons,” he said. “We made mistakes when we were young. But we need to separate the two issues.”

He said that, while terrorists and terrorist-sponsoring nations must be prevented from getting their hands on nuclear weapons, “many important inventions were invented for military purposes.”