A Korean take on monochrome and the abstract

A Korean take on monochrome and the abstract 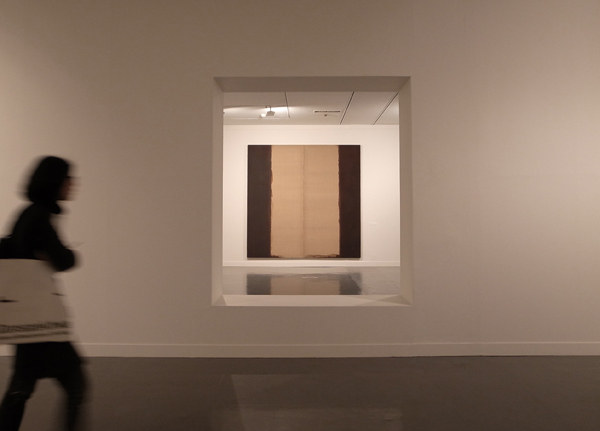 “Burnt Umber & Ultramarine Blue” by Yun Hyong-keun, as seen through a window-partition at a preview of “Dansaekhwa: Korean Monochrome Painting.” The exhibition starts tomorrow at the National Museum of Contemporary Art in Gwacheon, south of Seoul. By Moon So-young

Abstract paintings, especially monochrome paintings, are important to those who study modern and contemporary art, because they are considered to be the ultimate stage for modern painters, who refused to create illusions that copied reality and instead chose to build independent universes in their canvases. Monochrome paintings in particular led Korea’s post-war Modern Art movement.

Now, the National Museum of Contemporary Art in Gwacheon, south of Seoul, is holding a large-scale exhibition that traces the stream of Korean monochrome paintings from the 1970s to the present day.

The museum’s decision to highlight the Korean term “dansaekhwa” in the title instead of simply using its English translation, “monochrome painting,” was simple, according to Yoon Jin-sup, a professor at Honam University who was invited to curate the show.

“The repetition of strokes or patterns in Korean dansaekhwa implies the repetition of the artist’s actions and is a kind of spiritual practice. This gives the paintings a very tactile quality.”

The museum also said its use of the term dansaekhwa represents a first step towards establishing a branch of Korean art that can take center stage in the international art arena.

The exhibition features more than 150 paintings by 31 local artists.

Among the participating artists is Kim Whanki, one of the most important figures in the country’s modern art history, who is best known for abstract paintings with numerous dots, mainly in cold tones.

Another participating artist is Lee U-fan, one of the country’s best internationally-recognized, living artists.

Also included in the exhibition are works by other artists from the early period of Korean monochrome painting and 14 artists belonging to the late period.