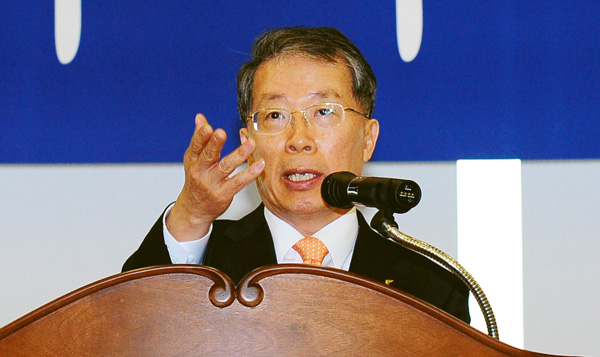 Yun Yong-ro, the new president of Korea Exchange Bank, talks at a shareholders meeting at the company’s headquarters in central Seoul on Tuesday. Yun had his first press conference as the bank’s new chief yesterday. [NEWSIS]


Yun Yong-ro, the new president of Korea Exchange Bank, said his ultimate goal is to turn the bank into a competitive global financial institution by repairing its sales network, which was crippled during the lengthy process of being acquired from U.S. fund Lone Star.

“We will regain our past reputation as an expert in foreign exchange and become a global bank by strengthening our overseas sales, optimizing our expertise in corporate finance and recovering our credibility and the trust of our customers,” Yun said yesterday at his first press briefing as the new head of KEB.

“Brand value and credibility is very important when selling financial products,” he said. “We plan on improving our brand value.”

“We still have a long way to go,” Yun added.

He stressed that he plans on looking into multiple strategies, including mergers and acquisitions, to boost global sales.

“It is possible we could tap the Chinese market by using our common cultural background,” he said, “or make further advances in the South American market, where major Korean businesses are continuing to expand.”

But a priority must be placed on repairing the bank’s damaged sales network, he said.

It took Hana Financial over a year to acquire a controlling stake in KEB after the initial sales contract was signed with former majority shareholder Lone Star in November 2010.

As the deal dragged on, speculation grew that it could fall through, as was the case with similar takeovers involving KB Financial Group and HSBC. This led to a massive exodus of customers between 2010 and 2011 as they lost faith in KEB, said one industry insider.

Meanwhile, rivals including the Industrial Bank of Korea poached some of its major clients, the source said. “We could see our clients slipping away, but there wasn’t much that we could do about it,” he added.

During the nine years under Lone Star, KEB’s sales network failed to expand aggressively. Only 35 branches were opened. It now has 356.

But Yun noted that improving sales will not necessarily require ramping up the number of branches.

“The role of our domestic bank branches has been shrinking,” he said.” While in the past, the majority of banking operations were concentrated in these branches, nowadays customers are relying more on their smartphones and other methods.”

The banker also stressed that KEB will utilize the network it has with Hana both at home and abroad.

“Hana Bank has a competitive edge in retail banking, whereas KEB has a strong advantage in corporate finance,” Yun said. “Additionally, Hana has done better in the Chungcheong region, whereas KEB has a strong grip in Gyeongsang, where there are numerous export-focused businesses, such as shipbuilding. If we share information, we could create positive synergy even in our overseas businesses.”

Yun also said KEB must increase its social contributions, an area it has neglected in recent years.

“Banks can no longer exist alone,” he said.