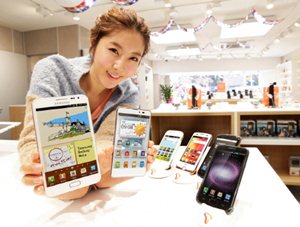 The targets of the Fair Trade Commission’s crackdown were SKT, KT, LG U+, Samsung Electronics, LG Electronics and Pantech.

SK Telecom, the country’s top mobile carrier, was slapped with the largest fine of 20.2 billion won, followed by Samsung, which was ordered to pay 14.2 billion won, it said.

“When inflation dies down, cell phone prices will become more affordable, which will take some of the burden off households’ expenses,” said Shin Young-sun, a director at the FTC.

The commission also ordered the companies to clearly disclose the retail prices of cell phones and the amount of the discounts given to customers on their respective company web sites.

“It is deceptive marketing,” the FTC said in a release. “These companies are not offering any actual discount.”

Customers are led to believe that they are getting discounts when they are actually getting subsidies on phones purchased with a calling plan. The subsidies rise in line with more expensive plans, effectively canceling each other out.

“At present, the cell phone sales are intertwined with mobile carrier services, and this makes it hard for customers to understand the pricing structure of cell phones,” the FTC said.

From 2008 to 2010, the three mobile carriers intentionally raised the prices of 44 types of cell phones by an average of 225,000 won. They then disguised the inflated hikes by reorganizing the way customers pay their bills, the watchdog said.

For example, the retail price of Samsung’s best-selling Galaxy S, which has a factory price set at 639,000 won, was found to have been inflated to 949,000 won. Customers were then told they were getting a 78,000 won discount, and the balance was divided into monthly installments, according to the length of the payment plan, and added to the monthly phone bills.

The phone manufacturers were also found to have conspired in setting products at higher prices on 209 cell phones before selling them to mobile carriers. Some of the stores were then made to sell the phones on to customers at discounted prices.

Separately, the commission imposed another fine of 440 million won on SK Telecom for favoring its affiliated stores, saying that the company threatened to stop activating Samsung phones purchased at nonaffiliated outlets.

However, Samsung Electronics and SK Telecom are contesting the FTC’s findings. They have both threatened to file lawsuits against the watchdog, claiming that they never colluded to inflate retail prices.

“It’s a common marketing strategy to use discounts as promotional tools for many products, including cell phones,” SK Telecom said yesterday.