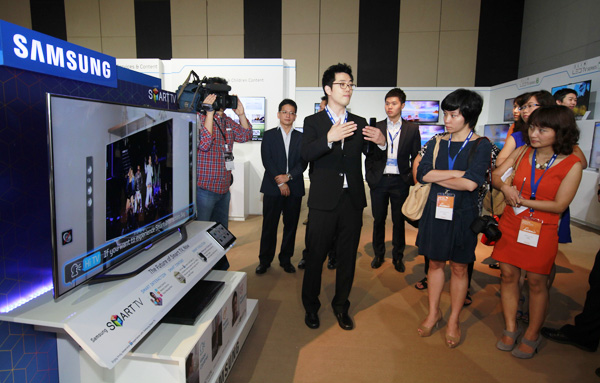 A marketing employee of Samsung Electronics explains to local consumers the detailed functions of the company’s premium smart TV at the 2012 Samsung Southeast Asia Forum, which was held at the Bangkok Convention Center in Thailand yesterday. The forum, which introduces various premium products from Samsung, runs until today. [YONHAP]

Prompted by encouraging sales growth last year, Samsung Electronics is ramping up its marketing efforts to expand its presence in Southeast Asia by holding a regional forum in Thailand to introduce its premium products to the region.

The country’s largest electronics manufacturer announced yesterday that it will launch premium home appliances and digital devices in 12 Southeast Asian countries at the 2012 Samsung Southeast Asia Forum, held in Bangkok from Wednesday through today.

The ES8000 smart TV, which the company has dubbed “the future of smart TV,” packs in next-generation features such as voice and gesture controls and the ability to recognize facial expressions. It was first introduced at the Consumer Electronics Show in Las Vegas in January, where it won an Innovation Award for its high-tech features. It was then unveiled in Korea on Feb. 8.

Additionally, Samsung will introduce various premium monitors, including its Series 9 SB970, which is gaining a reputation for its elegant silhouette. Another monitor, the SB310, is designed with an Indonesian batik pattern as part of efforts to win over local customers. The front side of the monitor is colored blue to symbolize peace and happiness, the company said.

One of Samsung’s goals in Southeast Asia is to target local people using traditional design patterns that are familiar to them, the company said.

Samsung has decided to accelerate its operations in the region given the proven scope for further growth there. It achieved explosive growth last year, with sales rising 40 percent on the back of strategic products, including its flat-screen TVs, premium refrigerators and smartphones.

Samsung topped the global flat-screen TV market with a 26.3 percent market share in 2011, despite the continued downturn in the TV market, according to U.S.-based research institute NPD Group.

The company has set up a product innovation team to further localize products.