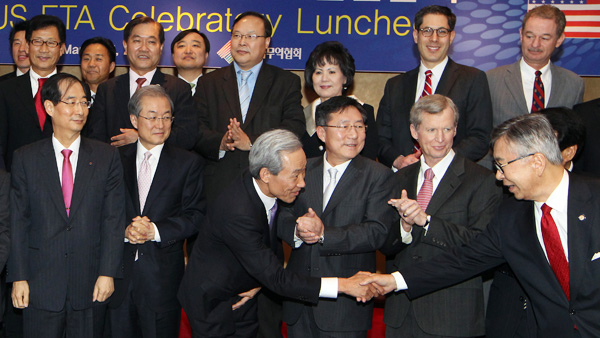 The Korea International Trade Association hosts a celebration luncheon for the implementation of the Korea-U.S. FTA yesterday at the Grand Intercontinental Hotel in southern Seoul, inviting incumbent and former officials from both countries who were involved in the negotiations. By Choi Seung-shik


The presidents of Korea and the United States yesterday reaffirmed their commitment to the free trade agreement between the two countries and agreed to use the accord as a stepping stone to overcome economic crises and boost growth. 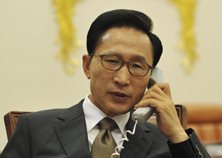 According to the Blue House, President Lee Myung-bak and U.S. President Barack Obama had a roughly 10-minute telephone conversation at 6:30 a.m. yesterday to mark the implementation of the trade accord.

During the conversation, the two leaders agreed that the bilateral deal will serve as an exemplary model for global free trade. 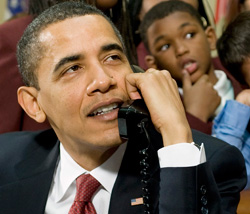 “I have high expectations that the implementation of the Korea-U.S. FTA will contribute to the two countries’ economic development and strengthen our bilateral relationship,” Lee told Obama, praising the U.S. president’s efforts, the Blue House said.

“The FTA will be a great model for international free trade, and I expect to see a successful outcome. It is a good sign not only for the United States, but for the world economy that the American economy is gradually recovering and jobs are increasing.”

According to the Blue House, Obama seemed happy that the FTA finally came into effect. Calling it an important development for the two countries’ people and alliance, Obama showed appreciation for Lee’s support for the accord, the Blue House said.

Obama expressed hope that the two countries’ trade will increase and jobs will be created as the agreement took effect, the Blue House said, adding that the FTA will contribute to the opening of the global markets.

The Blue House said the two leaders also promised to have in-depth discussions on Northeast Asia affairs, including the North Korea issue, at their meeting later this month at the Nuclear Security Summit in Seoul.

Later in the morning, Lee visited the FTA support center at the Korea International Trade Association with key trade and commerce officials. During his visit, Lee stressed the importance of the government’s support for the small companies to adapt to the changed business environments in the post-Korea-U.S. FTA era.

He talked with owners of small textile and auto component makers to listen to their difficulties. Urging them to make the best out of the FTA, Lee said the Korea International Trade Association and the Ministry of Knowledge Economy will provide assistance to the small firms.

While the administration and business community were sanguine about the FTA implementation, the public was split over the issue.

Liberal civic groups and politicians said they will continue their protests against the trade deal. An alliance of civic groups against the Korea-U.S. FTA held a press conference yesterday and declared it will begin a campaign to scrap the agreement. Calling it an unfair, losing accord that infringed upon Korea’s sovereignty, the civic groups said only conglomerates benefit from the FTA.

In contrast, conservative civic groups that support free trade with the United States held a rally on Wednesday to welcome the trade agreement. They also held another rally yesterday afternoon near Seoul Station to celebrate the first day of the FTA’s implementation.