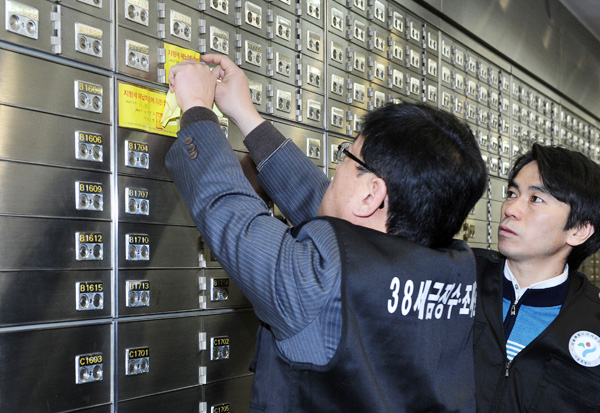 Officials from the 38th tax collection team of the Seoul Metropolitan Government seal a private safe-deposit box with a confiscation warrant at a bank in Seoul, yesterday. The city government has confiscated 503 safe deposit boxes of 423 delinquent taxpayers whose tax arrears are more than 10 million won (8,830 dollar), urging them to pay the arrears by end of the month. Seoul said it will auction off the contents of the boxes if the delinquents do not pay their debts. [NEWSIS]

Police are chasing a man who has been stealing smartphones from pedestrians in Seoul.

According to Seoul Metropolitan Police, they are looking for a suspect who has been stealing pedestrians’ smartphones on the streets of Hyehwa-dong, Dongdaemun and Jongno in central Seoul since last week.

The police have nicknamed the suspect as the “Black Spider,” as he dresses in black like the black Spider-Man in the movie “Spider-Man 3.”

The suspect wears a full-body black track suit, black helmet and gloves, and drives a black 125cc motorcycle. He targets women and people in their 40s and 50s walking on the street by driving up to them on his motorcycle and asking to borrow their smartphones.

The suspect introduces himself as a delivery man and says he needs to make a call for an emergency, telling victims that his phone is dead, and then takes off with the phone.

On March 7, around 2 p.m., a woman in her 20s was standing at a bus stop in Dongdaemun. The suspect drove up to her on his motorcycle and asked to borrow her smartphone. She lent it to him and then couldn’t stop him from driving away.

“I couldn’t identify his face because he was wearing a black tinted helmet,” the victim told the police during questioning.

The police said that the suspect has stolen five smartphones in the last week, presuming that every case was committed by the same person.

“We’re having trouble identifying the suspect due to lack of evidence,” a spokesman at the Seoul Metropolitan Police told the JoongAng Ilbo.