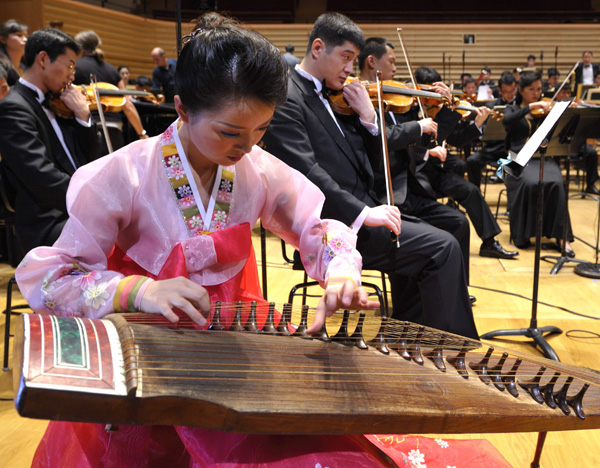 A musician plays a traditional Korean instrument, or gayageum, during the final rehearsal of North Korea’s Unhasu Orchestra with the Radio France Philharmonic Orchestra in Paris, on Wednesday. South Korean maestro Chung Myung-whun invited the North’s orchestra for a joint concert with the French orchestra in Paris tonight at the Salle Pleyel. [REUTERS/YONHAP]


A North Korean orchestra conducted a joint performance with a French team in Paris under the direction of a South Korean conductor, opening up new possibilities of developing cultural interactions between the two Koreas.

Pyongyang’s Unhasu Orchestra, which consists of 70 musicians in their 20s, teamed up with the Radio Philharmonic Orchestra of France at the Salle Pleyel theater in central Paris. It’s the first time that a North Korean orchestra has given such a performance in Europe.

“We are witnessing a historic moment that I hope will not be an isolated event,” Radio France’s first violinist Svetlin Roussev said before the concert. “This could be the first stone to build on towards something that could be immense, for history and the world.”

During the three-hour-long concert, the young musicians from Pyongyang performed North Korean songs and violin concertos, mixed in with traditional instruments such as the gayageum (12-string zither). The orchestra’s first violinist Mun Kyong-jin performed a special encore in response to three curtain calls.

The highlight of the concert was the final song, “Arirang.”
“I chose Arirang for the concert because it is the most well-known, beloved song by Koreans before the country was divided,” Chung said. “I also chose the song out of consideration that we should be one through music.”

Mun also said she was moved.

“I was very moved, which I had hardly felt before. I was almost shedding tears while I was performing ‘Arirang,’?” Mun said.

The renowned South Korean conductor had previously attempted to hold an inter-Korean concert, but the still-strained relationship with the North blocked his efforts. So he alternatively asked the Unhasu Orchestra to join the Paris team and travel to France, where he is currently working as the musical director.

The Unhasu Orchestra made its first appearance in the North’s media in 2009. With young, talented musicians, it was reportedly formed to appeal to the taste of young heir Kim Jong-un, and is more favored by the successor than the regime’s official orchestra.