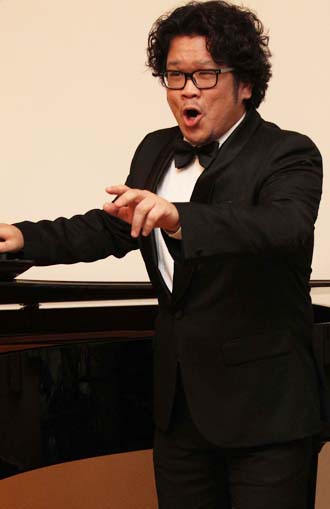 Yun Jung-soo performs at a recital at the British Embassy in Seoul for the Chevening Alumni Association gathering Wednesday night. [YONHAP]

The first Korean artist to receive a Tier 1 (exceptional talent) visa, granted by the British government to talented individuals who are world leaders in the arts or sciences, performed in an opera recital yesterday at the British Embassy in central Seoul during a gathering of U.K. alumni.

Tenor Yun Jung-soo, 32, who has won multiple international music awards and studied at the International Academy of Voice at Cardiff University in Wales on a full scholarship, was issued the visa by the U.K. Border Agency in February in recognition of his contribution to the arts. Yun, the first-prize recipient of Spain’s Montserrat Caballe International Singing Competition in 2011 and London’s Richard Tauber Prize in 2010, expressed, “I was in a position where I might have had to leave the U.K. because of visa issues. I was extremely lucky in many aspects.”

After receiving media attention, a casting director for the prestigious Royal Opera at Covent Garden, London, heard Yun’s performance and wrote a recommendation letter to the British government. Yun has recently performed for Prince Charles at St. James’s Palace, took the title role in “Werther” at the Les Azuriales Opera in Nice, France, and appeared as a guest in Dame Kiri Te Kanawa’s Christmas concert at the Cadogan Hall in London.

Exceptional talent visas were introduced in August 2011 to encourage world leaders or those with potential in the fields of sciences, humanities, engineering and the arts to live and work in the U.K.

The British Embassy hosted the Chevening Alumni Association reception Wednesday night, gathering Korean recipients of the prestigious and highly competitive Chevening Scholarship for international students, founded in 1984 and funded by the British government’s Foreign and Commonwealth Office. Of the 1,070 Korean recipients of the scholarship, many have gone on to renowned careers in government, academia and industry. This was followed by a special performance of three international award-winning Korean opera singers who had studied in music conservatories in the U.K. with scholarships. Yun closed the evening with a powerful rendition of Massenet’s “Pourquoi Me Reveiller” from the opera “Werther,” followed by an encore.

British Ambassador to Korea Scott Wightman said, “Students that went to study in U.K.’s greatest educational institutes can come back and share their experiences in Korea and develop a long-term relationship with the U.K.” Yun, who admits to loving noraebang (Korean singing rooms), has a busy year ahead, performing with the Opera Holland Park and the prestigious Royal Opera.