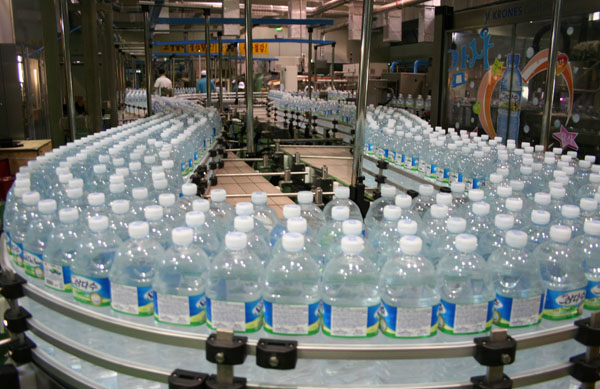 Kwangdong Pharmaceutical has been chosen as a preferred bidder to distribute Jeju Samdasoo, the nation’s favorite brand of natural mineral water. 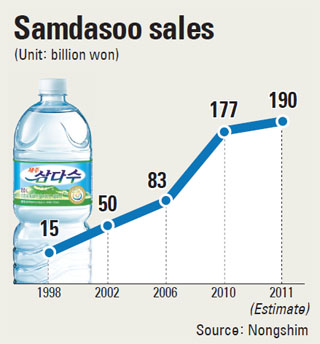 Food giant Nongshim, which is known for its iconic instant noodle product Shin Ramyun, has been in charge of distributing the bottled water for 14 years.

The Jeju Special Self-Governing Province Development Corporation (JPDC), which sources water from Jeju Island, announced on Thursday that it picked Kwangdong over six other competitors because of its local retail network.

Kwangdong has been aggressively expanding its beverage business. The firm raised 313.2 billion won ($278 million) in sales, 62.3 percent of which was generated from drinks.

A total of seven companies, including No. 2 mineral water distributor Lotte Chilsung, No. 3 mineral water producer Hite-Jinro, and the Coca-Cola Beverage Company, competed for the right to distribute Jeju Samdasoo. The strong interest was linked to the product’s strong brand power.

Jeju Samdasoo controls 50 percent of the domestic market for bottled mineral water and is considered the closest Korean equivalent to France’s Evian. While the latter is sourced from the French Alps, Jeju Samdasoo’s mineral water is pumped up from volcanic aquifers located 420 meters (1,370 feet) deep inside Mount Halla.

“Korean customers prefer Jeju Samdasoo over products from other regions, such as Pyeongchang of Gangwon, because our water goes through dozens of layers of volcanic basin,” said an official at JPDC. “This removes impurities, while natural minerals are infused simultaneously.”

The official said JPDC aims to export Samdasoo to Thailand, the Philippines and Malaysia as early as 2014 to raise its international profile. It is currently shipped to the United States, Japan, Singapore and China.

Analysts at securities firms estimate that Jeju Samdasoo raised 190 billion won in sales last year, up 6.8 percent from 177.1 billion in 2010.

Although JPDC wants to sign a formal contract with Kwangdong by next Saturday so the firm can start distributing from April, industry observers said JPDC’s plan will likely be suspended because it is locked in four lawsuits with Nongshim over its mineral water business.

JPDC said last December that it would not be renewing its retail contract with Nongshim this year and that it would stop sourcing water to the company. The contract expired on Wednesday.

In explaining its decision, JPDC said it considered the terms of the contract to be unfair. It believes the food maker should share more of its profits with the provincial government and Jeju residents to aid regional development.

Nongshim responded by filing an injunction against JPDC to kill the latter’s attempt to ban it from distributing the mineral water. After Nongshim’s complaint was rejected by a local district court in December, the Gwangju High Court on Wednesday overturned the lower court’s decision and ruled in favor of Nongshim.

“Even if the JPDC takes the case to the Supreme Court on appeal, Nongshim can continue distributing Samdasoo until the highest court delivers its verdict,” said a Nongshim official, who asked not to be named, citing the sensitivity of the issue. “When Samdasoo first hit the shelves in 1998, it only raised 15 billion won in sales. Without Nongshim’s heavy investments to build solid marketing, advertising, sales and distribution channels to grow the brand, Samdasoo would have never been able to raise 190 billion won in sales last year.”

The official said Nongshim has not looked into launching its own water brand, and that its top priority is resolving its legal disputes.

In February, the company filed another injunction with a local court to halt the JPDC’s bidding procedure. The court accepted the temporary injunction on Thursday.