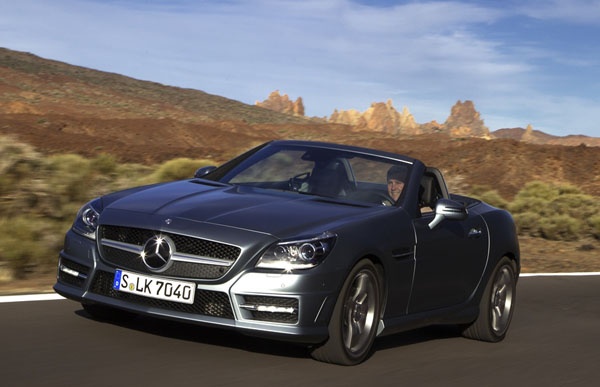 When the roof comes down and the turbo kicks in, it’s hard to beat the new SLK200, which offers terrifically smooth handling and panache. Provided by the company

As if the SLK200 BlueEfficiency was not sexy enough already, its panoramic vario-roof gives you the sense of sitting inside a morphing - and sentient - Autobot as you watch all the moving parts reassemble behind and overhead. 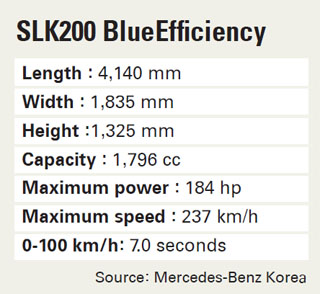 Meanwhile, the four-cylinder, 1.8-liter turbocharged engine’s high pressure injection system packs a mighty punch at higher speeds, but suffers from a slight turbo lag at lower revs as it gallops from 0 to 100 kilometers per hour (0 to 60 miles per hour) in 7 seconds while delivering up to 184 horsepower.

This means you don’t want to be racing Porsche Boxters when the lights change. Not if you want to make them eat your environmentally friendlier dust. But throwing down the gauntlet to an Infiniti on the expressway to Ilsan is another matter.

The roof is one of the main selling-points of the third-generation model - which is light on its feet, beautifully responsive and visually stunning - and it’s easy to see why.

In just under 20 seconds, the hardtop coupe converts into an open top roadster with all the panache, if not speed, of a Michael Bay-directed action sequence. Sadly, it can’t transform on the move, but then again, Bumblebee, a VW Beetle, never looked this good. Neither did his younger brother, the Audi TT.

Ajummas will stop peeling their cabbages in the street in other-worldly shock as you transform. IPad-toting college girls will swoon whatever mode the car is in, and salary men will rubberneck with covetous eyes.

But get used to it. You’re at the wheel of a car that looks like it was sculpted by Michelangelo - the Adonis of its market segment (also, at 11.6 kilometers to the liter, the most economical). At 67.5 million won ($60,000), it’s the cheapest model in the SLK range, but still one-third more than what I would have to pay for it back home in the U.K.

While its predecessor, released in 2004, already overcame critics’ gripes about the first-generation’s poor handling, there was still something about version two that appealed more to Knightsbridge hairdressers than Premier League strikers.

Not so for the third incarnation, which is touted as being 70 percent all-new. It has a slightly longer, aluminum snout and more macho rear to emerge as a true metrosexual menace. The large-insignia-bearing front grille, five-spoke alloys, dual-housed headlamps and ambient lighting on the control panel also represent cosmetic surgery at its finest.

In contrast, the BMW Z3 looks like a girl’s handbag and drives with all the rigidity of a roller coaster. It might have seemed cool when 007 drove one, but not anymore.

Impressively, given the size of the local luxury car market and Koreans’ infatuation with Beamers, the 200 BlueEfficiency has already sold 121 units in Korea in the first two months of the year. It was released on Jan. 9.

In terms of driving experience, it’s as smooth as a baby’s posterior - unless you’re hitting speed bumps at pace, when the sports suspension makes itself felt.

I also had a problem with the seats on the drive from Seoul to Nami Island, about 60 kilometers away, despite the car’s array of electronic seating adjustments including an inflatable air bag for the lower back. Although the heated leather seating is great, they just weren’t as comfortable over time as my chiropractor would have liked. And while I’m moaning, what happened to GPS as standard? Without that, my Nami trip almost involved a detour via Busan.

However, while some reviewers have griped about the engine’s lack of manly growl, I appreciated Mercedes’ efforts to minimize outside noise, which works a treat with the roof down and Cypress Hill blaring out of the speakers. On our last evening together, I even sat and listened to a few Whitney Houston songs, marveling at the acoustics.

Other features to crow about include: Six-CD/MP3 sound system with auxiliary/USB/iPod inputs; Bluetooth phone and audio streaming; and the trademarked AirScarf, which works wonderfully at keeping the back of your neck warm.

In short, the 200 BlueEfficiency can more than hold its own, even if the name isn’t half as cool as the car itself. It’s much more fun to drive than many reviewers give it credit for - despite the lack of engine growl and low-rev punch - but the Millennium Falcon it is not.

Then again, the seven-speed automatic gearbox lets you switch to manual mode by fiddling with buttons behind the steering wheel to compensate for some of the lag.

And let’s face it, you’re never going to get tired of looking at the thing.