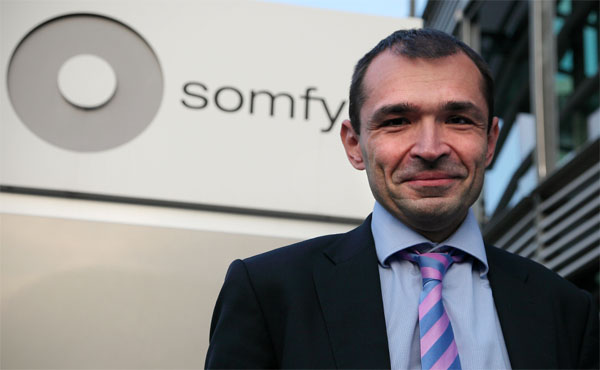 Somfy, a France-based group of companies that makes automatic systems for houses and buildings, is trying to expand its reach in Asian markets by promoting its indoor blinds in the region.

CEO Jean-Philippe Demael visited Korea this week to see how the group’s local operation is cultivating households as new customers. Previously, it focused on targeting businesses.

Demael said it is possible for Somfy to create a new target market because it sells blinds equipped with a smart technology that can help control the temperature inside the room automatically. The product also runs an alarm system for security purposes, he added.

He said the Korean market, known for its multitude of early adopters, is an especially good testing ground in the region as customers here provide rapid feedback on new products.

Somfy launched a series of motorized blinds in Korea in 2007 called Sonesse 30 after the company was inundated with requests from local customers for a noiseless motor, Demael said.

“In relatively quiet environments, such as people’s homes and executives’ offices, there is a strong demand for automated machines that don’t make much noise, or that are totally silent,” said Jung Sera, the assistant manager of Somfy Korea’s marketing team.

The fourth and newest product in the Sonesse series will be released in the second half of this year, Jung added.

Somfy, the global market leader in motorized blinds with a 60 percent share, controls about 90 percent of the Korean market in this segment.