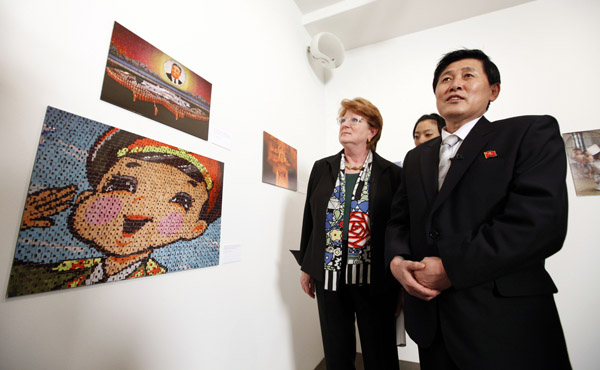 NEW YORK - It’s a simple scene that repeats itself around the world.

A man gently lifts a small child by the arms as they reach the top of the escalator inside a modern department store.

In this particular photograph, the man and the child are in Pyongyang, the capital of the communist country where life’s daily activities are largely a mystery to the rest of the world.

A photo exhibit that opened Thursday at a gallery in New York includes images such as these, as well as magnificent landscapes, drab cityscapes and visits by foreign dignitaries.

“Daily life is really what I try to focus on when I’m there .?.?. It’s unscripted, it’s candid,” said AP chief Asia photographer David Guttenfelder, who took some of the photographs in the show and has made many reporting trips to North Korea since 2010.

“For people to see their own life in other people’s lives, I think it has a lot of power to break down barriers.”

“Windows on North Korea: Photographs From the DPRK,” is a joint exhibition by The Associated Press and the North’s state-run Korean Central News Agency, and features a mix of archival and contemporary images.

The show was timed to open before the 100th anniversary of the birth of the nation’s founder, Kim Il Sung, on April 15, and comes two months after the AP expanded its operations in Pyongyang to include writers and photojournalists. The AP became the first international news organization to have a full-time presence in the secretive communist country when it opened a video bureau in 2006.

The photographs “give us rare views of the Democratic People’s Republic of Korea, a nation of great interest to the world, though little known,” said Kathleen Carroll, executive editor of the AP.

North Korea and the United States have never had formal diplomatic relations, and the two nations have experienced tensions over the years, particularly over Pyongyang’s nuclear ambitions. North Korea has tested two atomic devices in the past six years.

Tensions have recently eased somewhat. Late last month, the United States and North Korea announced an agreement that calls for Pyongyang to freeze its nuclear activities in exchange for food aid. But a surprise announcement by the North Koreans on Friday that they plan to blast a satellite into space on the back of a long-range rocket could jeopardize that agreement.

The exhibit’s organizers said they hoped the show would help foster better understanding between the two countries.

“My expectation is that this will be the first step in some peaceful reconciliation, and in a few years there will be trade, cultural exchange and tourists from each country coming to [the] other,” said Donald Rubin, who co-founded The 8th Floor gallery which hosts the exhibit.

Images on display included a 1953 KCNA photograph showing residents helping to rebuild Pyongyang’s central district after the Korean War, AP photos documenting visits by such prominent foreigners as Jimmy Carter, Bill Clinton and Madeleine Albright, as well as everyday scenes ranging from sunbathers at the beach to shoppers inside a modern department store.

“It is our hope that this exhibition would give exhibition-goers visual understanding of the people, customs, culture and history of the DPRK, thereby helping to deepen mutual understanding and improve the bilateral relations,” Kim Chang Gwang, KCNA’s senior vice president, said in an address at the show’s opening.

“In this exhibit, we are offered two perspectives of the DPRK - as viewed by her native daughters and sons from KCNA and by AP journalists visiting to chronicle news and daily life there. We can appreciate the different styles and techniques and points of view,” Carroll said. “These photographs also show us that different people can find common ground.”

The show also includes images taken by KCNA journalists who participated in a joint workshop in October led by AP instructors. The exhibition runs through to April 13. AP