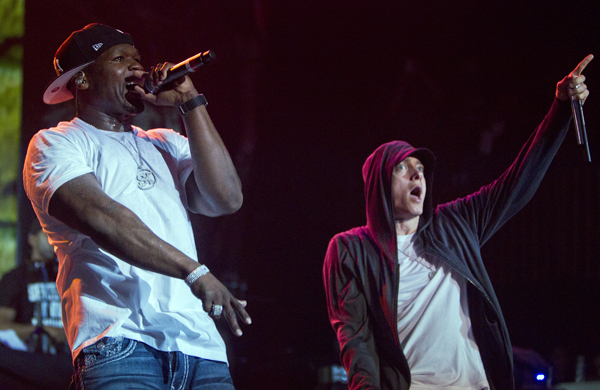 AUSTIN, Texas - The rumors were true: Eminem joined 50 Cent to recreate “Get Rich or Die Tryin’” Friday night at South By Southwest.

It was a throwback to the heyday of gangster rap at the music conference and festival as 50 Cent hit the stage at the Shady Records showcase in a camouflage bulletproof vest and a Yankees cap as clouds of chronic floated through the air. With a seven-piece band and MC Tony Yayo at his side, he laid down the 16 game-changing tracks from “Get Rich,” performing the entire album live for the first time.

“It’s been a minute,” he told the crowd of about 2,000 at the Austin Music Hall and an audience watching via Fuse and YouTube. “It’s been 10 years. That album sold 13 million copies. Damn.”

The album came out in February 2003, with Eminem and Dr. Dre serving as executive producers and featured rappers.

While Dr. Dre didn’t show in Austin, Eminem joined 50 Cent on “Patiently Waiting” and a short encore that almost didn’t come off because of lackluster crowd reaction, a commonplace occurrence at SXSW.

Fit and on his game, 50 seemed in high spirits throughout the show and marveled at how, against the odds, he did get rich and didn’t die tryin’.

“The money came so fast, I couldn’t [expletive] it up,” the 36-year-old said. “I was trying everything I could think of.”AP