George Clooney and father arrested in protest at Sudanese Embassy

George Clooney and father arrested in protest at Sudanese Embassy 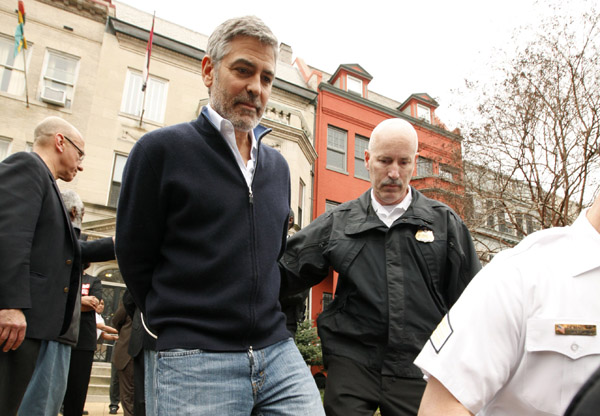 
WASHINGTON - Film actor George Clooney and his father were arrested Friday during a protest outside the Sudanese Embassy, and the actor said he has asked U.S. President Barack Obama to engage China to help stop a humanitarian crisis in northern Africa.

The protesters accuse Sudanese President Omar al-Bashir of provoking a humanitarian crisis and blocking food and aid from entering the Nuba Mountains in the country’s border region with South Sudan.

Clooney, his father Nick Clooney and others were arrested after being warned three times not to cross a police line outside the embassy. Those taken into custody included civil rights activists Ben Jealous and Martin Luther King III and actor and comedian Dick Gregory.

Several members of Congress also were arrested, handcuffed and placed into a U.S. Secret Service van.

The arrests came after Oscar winner Clooney, a noted advocate for Africa’s poor, met this week with Obama, testified in the U.S. Senate and attended a state dinner for British Prime Minister David Cameron.

Clooney told The Associated Press before he was arrested that he can only hope to draw attention to the crisis in Sudan but that he doesn’t know if any progress has been made. He said he was impressed, though, with Obama’s engagement on the issue.

“It’s amazing to sit down with a world leader who knows all of the intricacies of what’s going on in Sudan,” he said. The actor said he asked Obama to involve China more in pushing for a solution in Sudan. He said international leaders need to “follow the money” flowing to Sudan’s leaders to expose corruption.

“This is a moment where we have a chance to do something, because if we don’t, in the next three to four months, there’s going to be a real humanitarian disaster,” Clooney said before his arrest. “It’s such a silly thought to think you’re actually succeeding in any of this,” he said. “But if it’s loud enough and you keep making it loud enough, at the very least people will know about it.” AP