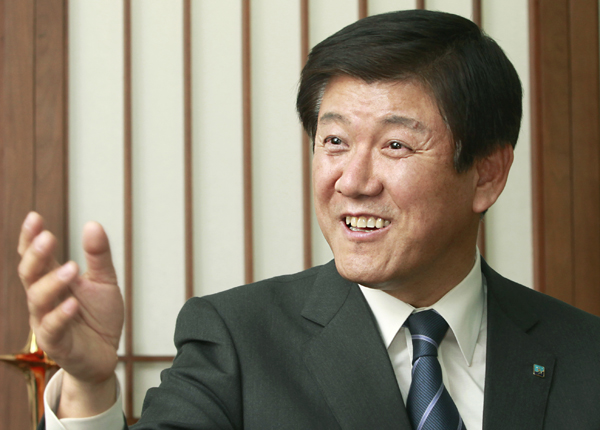 By Korea’s financial industry standards, Cho Jun-hee, the chairman and CEO of the Industrial Bank of Korea (IBK), is a rare example of accessibility. 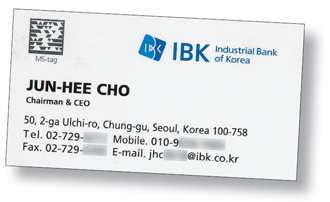 Cho’s mobile phone number is on his business cards, and he personally fields “between 40 and 50” phone calls from the bank’s chief clients - small- and medium-sized enterprises (SMEs) - per day. Such a practice is still unheard of among many CEOs of domestic banks.

“We’re a service industry,” Cho explained. “If an SME client is ready to call the CEO of a bank, it must be in a very difficult spot. Why shouldn’t I be able to talk to them?”

IBK is a state-controlled bank founded in 1961 to finance and support Korea’s SMEs. It is legally bound to lend more than 70 percent of its total loans to SMEs.

With the government holding a roughly 80 percent stake, the head of IBK is chosen by the president and has traditionally been of a bureaucratic background. But as the first CEO of the state-run bank to rise from within, Cho, 58, evinced a detailed understanding of the bank, its employees and the needs of its clients.

Cho sat down with the Korea JoongAng Daily last Thursday to outline his vision for businesses that will sustain the bank long after his current three-year term is over in 2013 - including expanding IBK’s retail banking and how standing by SME clients during difficult times pays off in the long run.

Q. You became CEO after the 2008 financial crisis and paid particular attention to SME lending. But lately IBK has been trying to expand its retail presence. What’s been behind this move?

A. It’s been 51 years since the founding of IBK, but between 20 to 30 percent of the Korean public still thinks that IBK doesn’t do retail banking. Moreover, IBK currently has 620 branches nationwide, but because we are centered around corporate clients, more than 70 percent of those branches are in industrial complexes. That’s natural, as the bank was born to foster Korea’s SMEs.

However, the government completely pulled the state funds it used to infuse into IBK. We have to finance 100 percent of our SME loans ourselves. There are many ways IBK can to raise money, such as issuing up to 200 trillion won ($178 billion) worth of “small- and medium-industry finance (SMIF) bonds” as a state-run bank, but we currently have less than 60 trillion won issued in these bonds.

But IBK will be privatized someday, and does not have a future without building self-reliance.

What are your strategies to overcome such limitations?

First, we have to overcome the fact that 20 to 30 percent of the public doesn’t know IBK does retail banking. That’s why we came up with the slogan “IBK is a bank open to the entire Korean public. When you save in IBK, you save companies. When companies are saved, jobs are created.”

The advertisement campaign with Song Hae [a family-friendly 85-year-old host of a long-running TV show] saying the slogan has been a big hit. It’s our goal to root out the lack of awareness by this year’s end.

Second, we lack branches. We often see SME employees receive their monthly pay in IBK accounts, and immediately transfer that money to other bank accounts because there are no IBK branches near their apartment complexes. And without deposits, there cannot be lending.

This problem must be solved - despite advancements in IT, the most important factor for Koreans [in deciding their main bank] is points of contact. So we launched booths combining pay phones and ATMs by entering into an exclusive partnership with KT subsidiary KT Linkus.

We plan to set up 1,000 such booths by the end of this year. Considering Kookmin Bank [the largest domestic bank by branch network] has roughly 1,200 branches, we believe 1,000 booths plus our 620 existing bank branches will help provide better coverage among retail customers.

But IBK’s purpose has always been supporting SME customers.

IBK is competitive in SME financing because it has the experience to gauge competitive SMEs that will not fail. At the end of 2010, IBK’s percentage of overdue debt was 0.67 percent - lower than the commercial bank average of 0.79 percent. So analysts were watching us closely last year, some expecting us to sustain losses. But last year’s [earnings] were great.

When going out and visiting work sites, you have to be able to tell whether the SME will succeed by the employee’s expressions. This is why SME loans cannot be tackled by just any bank with money.


What other businesses will IBK pursue?

We are playing to our strengths like social overhead capital [funding public infrastructure such as roads and airports] and cultural contents; IBK is the only domestic bank that funds the production of Korean animations and TV shows, such as last year’s hit drama “Deep Rooted Tree.”

Another is our free consulting services for SME clients. Before I became CEO, [IBK] had 25 consultants made up of professional chartered accountants, tax accountants and lawyers. Last year, I hired 36 more.

These consultants advise SMEs in some their biggest issues such as CEO succession and inheritance, as first-generation founders of many of these SMEs are in their 70s.

We will invest some 100 billion won to provide this service free of charge to some 1,000 SMEs by next year.