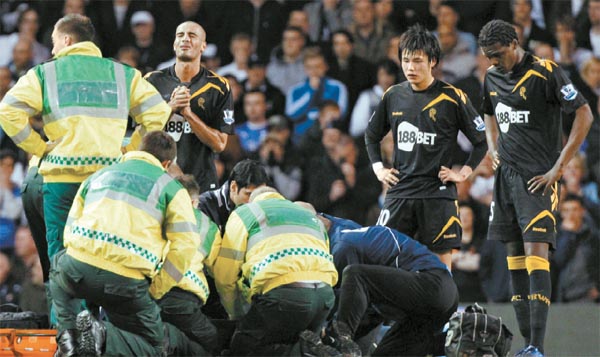 Fabrice Muamba is obscured by staff trying to resuscitate him after he collapsed during the English FA Cup quarterfinal between Tottenham Hotspur and Bolton Wanderers at White Hart Lane stadium in London, Saturday.[AP/YONHAP]

LONDON - Bolton midfielder Fabrice Muamba was critically ill in a hospital’s heart attack unit on Saturday night after collapsing during a match at Tottenham that was subsequently abandoned.

The Zaire-born England Under-21 international fell face-down on the pitch near the halfway line without any players near him.

Medics rushed onto the pitch with a defibrillator and treated the 23-year-old Muamba, pumping his chest for around six minutes of treatment before he was rushed to the hospital.

“Fabrice Muamba has been admitted to the heart attack center at London Chest Hospital where he is currently in a critically ill condition in intensive care,” Bolton said in a statement around three hours after the incident. “No further information will be issued at this stage. The club has requested the media to respect his family’s privacy at this time.”

When Muamba collapsed in the 41st minute of the FA Cup match, Bolton manager Owen Coyle shouted from the touchline, “He’s just collapsed.”

Tottenham players William Gallas and Louis Saha, along with referee Howard Webb, immediately beckoned for medical support as the quarterfinal was stopped and live television coverage turned away from the scene.

Some distressed players appeared to be praying and tearful as fans chanted Muamba’s name between periods of complete silence at White Hart Lane.

The crowd rose in applause as Muamba was carried off on a stretcher wearing an oxygen mask while still having his chest pumped. The players also left the pitch before Webb abandoned the match shortly after.

Coyle and striker Kevin Davies accompanied Muamba to the hospital, while the rest of the squad returned to northwest England by train.

Former Arsenal teammate Johan Djourou wrote on Twitter that he had visited Muamba on Saturday night.

“Just left the hospital,” he said. “Love you so much man! Keep fighting. Everybody please pray for him he’s an amazing man and friend.”

Tottenham striker Jermain Defoe, who played in Saturday’s match, tweeted, “God willing he will pull through.”

Muamba’s Bolton teammate Stuart Holden, who was watching the game on television, tweeted, “Praying for you Fab.”

“The guy is a fighter on and off the field. We love you bro,” he added. “Waiting anxiously for updates from teammates.”

Fabrice Ndala Muamba was born in what was then called Zaire in Africa on April 6, 1988. His father left the country for England because of political turmoil, and his son joined him in 1999.

“This is my adopted country,” Fabrice Muamba said last year. “People have helped me, welcomed me with open arms and given me this opportunity. I’m earning a more than decent living and leading a comfortable life. I’m very appreciative of that.”

The road to his professional football career started when he joined Arsenal’s youth academy in 2002.

He made his debut at age 17 on Oct. 25, 2005, in the League Cup at Sunderland, and was loaned to Birmingham in the League Championship the following season.

The loan was made permanent in May 2007, and he made his Premier League debut for Birmingham in 2007-8 before joining Bolton in June 2008.