Thorpe fails in bid to qualify for London 2012

Thorpe fails in bid to qualify for London 2012 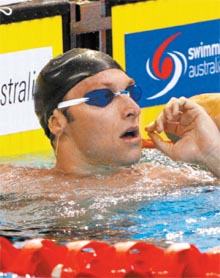 ADELAIDE, Australia - Ian Thorpe knew the instant he’d finished his 100-meter freestyle heat that he wouldn’t be competing at the London Olympics. He lingered in the outside lane until the swimmers in the next race had started, staring at his time on the scoreboard before slowly dragging himself out of the pool.

If he was shocked and “gutted” by his failure to reach the 200-meter freestyle final, failing to progress from the heats in the 100 on Sunday morning hit harder. But he was more circumspect this time.

The five-time Olympic champion vowed to continue swimming and said he wasn’t sorry about risking his reputation by making a comeback.

“Yeah, I’m still swimming,” he said. “When I started this I wanted to get back into the pool. I wanted to start racing again, I wanted to be competitive again and I wanted to go to the Olympics.

“I still want to do all of those things. I’ve missed out on what was a huge goal for me to accomplish in this short period of time, but still the desire I had pre to this, it’s still there. I still want to swim.”

He could even consider a bid for the Rio de Janeiro Olympics in 2016.

Asked the question, he laughed, then paused for a few moments before saying, “I’m not going to rule anything out at the moment.”

The regret was he didn’t give himself enough time to prepare. He quit in 2006 and didn’t return to competitive swimming until late last year.

“It’s tough. It’s hard coming to this competition and really, you know, failing in what I set out to do,” he said. “I’m disappointed that I really haven’t been able to race in a way that’s reflective of the work that I’ve done and how I’ve trained.

“I don’t regret giving this a go. Compared to how I’ve raced before, how I’ve competed and the success that I’ve had, this does look like doom .?.?. But I’m glad I was willing to put myself out there to give this a shot.”

The Thorpedo, as he was globally recognized, virtually ruled the pool until he retired. He says his comeback has reminded him of how stubborn he can be, but “all good athletes are.”