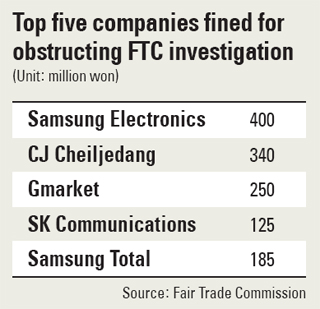 The antitrust agency has fined Samsung Electronics 400 million won ($355,000) for intentionally and frequently interfering with its investigation into mobile phone price-rigging.

The Fair Trade Commission said yesterday it is levying its largest fine for the obstruction of an official investigation, more than the 340 million won penalty it slapped on foodmaker CJ Cheiljedang last year.

According to the FTC, top-level Samsung executives ordered the company’s security force to block and delay an investigation team made up of five men from entering the company’s operations in Suwon, Gyeonggi, at 2:20 p.m.

The Samsung security team refused to budge, claiming that not even the president of the country was allowed to enter the premise without previous arrangements, the FTC said.

During this time, a high-ranking executive in the wireless department ordered employees to discard of related data and replace computers that held vital information.

The executive that refused to be interviewed deleted all the files on his personal computer, which he later admitted included files related to SK Telecom.

An internal report that the investigation team later found revealed that the security team followed orders and that the executive avoided the investigation according to a devised plan. Additionally, data that was turned in to the FTC turned out to have been manipulated.

An internal report also showed that after the investigation team visited, the company decided to strengthen its security to make it more difficult for government officials to enter.

These illegal activities were revealed in internal reports, e-mails of high-ranking officials and footage caught on surveillance cameras.

On Thursday the FTC announced that it has levied a combined 45.3 billion won fine on the three telecommunication companies including SK Telecom, KT, LG U+ as well as mobile phone manufacturers Samsung Electronics, LG Electronics and Pantech on grounds of false advertisement and price manipulation.

Last year’s investigation was to uncover whether the nation’s leading mobile phone manufacturer had breached the law by inflating the prices of its products and conspiring jointly with telecommunication companies to trick consumers with the lure of false discounts.

Samsung Electronics was fined 14.2 billion won for its participation.

This is not the first time that the leading Korean electronics manufacturer was fined by the government for impeding an FTC investigation.

Among the 15 fines against the illegal intervention of an FTC investigation between 1998 and 2011, five were from Samsung affiliates including Samsung Electronics.

“Companies that were under investigation repeatedly impeded proceedings since they didn’t feel much burden from the penalty, including fines,” said an official at the FTC.