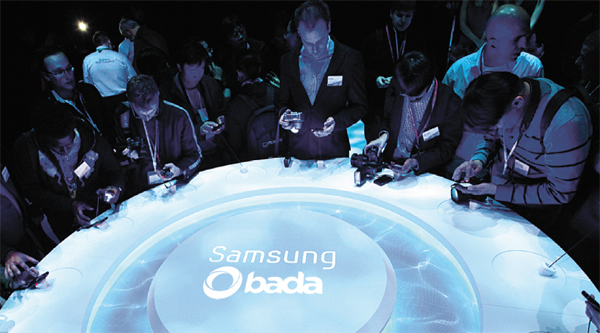 Smartphone users are well aware of Apple’s iOS, Google’s Android and Microsoft’s Windows operating systems, but Samsung Electronics’ Bada platform has maintained a low profile since it debuted in February 2010 on the company’s lower-end Wave smartphone. 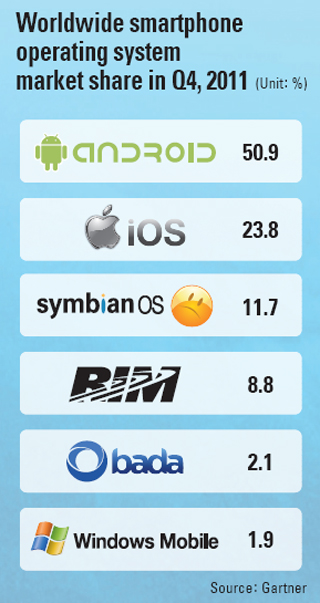 Sooner or later, the still-obscure platform, which means “ocean” in Korean, may further widen its territory in the smartphone ecosystem, given that Samsung is seen to be readying to open it to outside developers.

Kang Tae-jin, senior vice president of Samsung’s contents planning team, told the press at the Mobile World Congress in Barcelona in late February that Samsung will release the Bada source code under an open-source license.

“We developed Bada with the aim of opening it up from the beginning,” Kang said. “We will consolidate it with another platform and open it at an appropriate time.” He did not elaborate on the exact date.

The remarks, hinting at a possible software merger, came less than six months after Samsung announced for the first time that it was planning to open up Bada to outside developers. The Wall Street Journal reported last September that this is expected to happen this year.

Industry watchers say Tizen is a highly likely candidate for the merger, given that Kang was quoted by Forbes as saying in an interview in January that, “We have an effort that will merge Bada and Tizen.”

Tizen is a Linux-based open-source software platform developed by a consortium between Samsung and Intel. The first devices to use the new system are expected to hit the market in the middle of this year, said project host Linux Foundation, without naming any of the gadgets.

Regarding the vice president’s comments, a Samsung Electronics spokesman said on Wednesday that Tizen is just one of several options Samsung has been exploring with the hope of developing and promoting Bada, and that it is highly unlikely Samsung has already designated Tizen for the partnership. He made it clear, though, that Bada is a crucial part of the technology bellwether’s current software development projects.

Although Samsung, the world’s No. 2 smartphone vendor, is still equipped with a lineup that relies heavily on Android smartphones, it has been seeking ways to reduce its dependence on the Google system.

Senior Vice President Kang also stressed in Barcelona the significance of developing a homegrown platform for smartphones, saying, “Android is a global operating system but more than half of its applications don’t work with Samsung smartphones.”

Also, Google’s operating system may have encouraged Samsung to back off as last September it forged a patent licensing deal with Microsoft to pay royalties for Samsung’s mobile phones and tablets running the Android mobile platform.

Microsoft said the software giant has a wide range of patents used in the Android platform, and that under the agreement, Samsung needs to shell out royalties to Microsoft each time one of its Android phones is sold.

Bada has been met with much skepticism, though, mainly due to a new precedent that was recently set in the industry: Nokia’s apparent failure to secure an open-source policy for the Symbian platform. Symbian lost almost half of its share in the most recent fourth quarter, dropping to 11.7 percent from 22.1 percent in the preceding three months, according to market researcher Gartner in February.

Meanwhile, a researcher at a major economic institute in Korea said on the condition of anonymity that Bada is unlikely to emerge as a game changer in the market controlled by Android and iOS.

“For Bada to become a major operating system, there should be this virtuous circle of developers constantly coming up with new applications, and consumers downloading them,” he said. “But the apps are rather inconvenient compared with those from Apple or Google, and consumers aren’t getting that excited about them.

“Of course, that may not be a problem in countries where Apple and Google have a lower presence - where consumers are not really sensitive to high technology, in other words.”

The Wave 3, which hit the market in the middle of last month, is the latest and only smartphone from Samsung to run on Bada. It retails at just below 500,000 won ($443), making it roughly half the price of the iPhone 4S.

Also of note, Bada has already beaten Microsoft’s Windows Phone platform in terms of global market share, a feat it accomplished in the fourth quarter last year when it posted 2.1 percent to edge ahead of Microsoft’s 1.9 percent, according to Gartner.

However, both of these figures pale in comparison to Android’s 50.9 percent and iOS’s 23.8 percent in the same quarter.

Meanwhile, LG Electronics, Samsung’s domestic rival and the world’s fifth-largest seller of mobile devices last year, said it has no plans to develop its own smartphone OS “at the moment.”