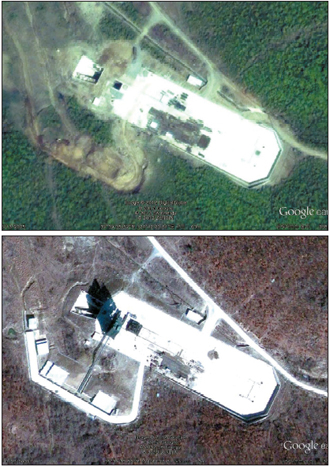 Images from Google Earth show the construction progress of the missile launch pad in Dongchang-ri, Cholsan County, on the west coast of North Korea. The top image is from 2005 and the image below is from 2009. According to the North’s flight plan, its three-stage rocket will be launched westward. The first stage booster is expected to land in the international waters between China and South Korea, while the second stage booster will fall in the waters off the Philippines.

International condemnations and worries are mounting over North Korea’s plans for a satellite launch, seen as a disguised test of military missiles.

The warming bilateral relations between North Korea and the United States sharply deteriorated due to the launch plan, putting the recent aid-for-denuclearization deal at risk of being scrapped.

The U.S. called the rocket launch a “deal breaker” for the bilateral agreement made in February in which the North agreed to halt its nuclear weapons program, including firing missiles, in exchange for receiving 240,000 metric tons of food aid.

“If they were to go forward with this launch, it’s very hard to imagine how we would be able to move forward with a regime whose word we have no confidence in and who has egregiously violated its international commitments,” the U.S. Department of State spokeswoman Victoria Nuland said Friday. “Were we to have a launch, it would create, obviously, tensions, and that would make the implementation of any kind of a nutritional agreement quite difficult.”

What will sit on top is of the most concern - experts say the launch technology of a missile and a satellite is almost the same. 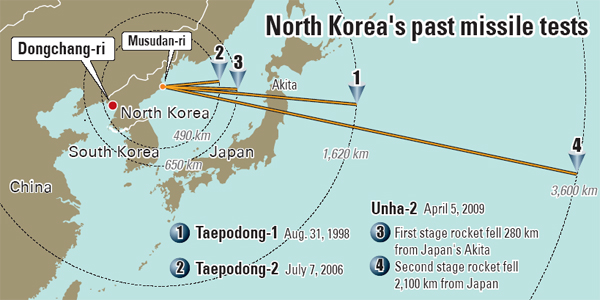 North Korea fired its first satellite, Kwangmyongsong, in 1998, which was viewed as a long-range missile test by the international community.

The North launched the first stage of the Kwangmyongsong-2 (Taepodong-2) in 2006 and completed the second stage in 2009.

The second stage of Kwanmyongsong-2 (Taepodong-2) was launched in 2009 as part of the carrier rocket Unha-2 and failed to reach orbit, according to the U.S. and South Korea, flying only 3,200 kilometers (1,988 miles) and falling into the Pacific Ocean.

Given the previous cases, a nuclear test always comes after a satellite launch in North Korea. Three months after the first stage of the Taepodong-2 in 2006, the first nuclear test was carried out and in 2009, a month after the test-firing of Kwangmyong-2, the regime conducted the second nuclear test.

“Seen in the previous cases, North Korea has a pattern of conducting nuclear tests after missile tests,” Yun Duk-min, a professor at the state-run Institute of Foreign Affairs and National Security, said. “Although there are speculations that the North is launching the satellite to consolidate the Kim Jong-un leadership or gain a bargaining chip in the food deal with the U.S., the important thing is that the launch is part of a procedure to develop missiles. One or two months after the launch, they will possibly conduct a nuclear test.”

Park Yeong-ho, a senior fellow at the Korea Institute for National Unification under the Unification Ministry of South Korea, also said, “Currently, there’s not that high of a possibility of a nuclear test, because it apparently breaks the Feb. 29 agreement with the United States. However, if the UN Security Council exerts pressure on North Korea by tightening sanctions again along with Japan and South Korea, they could be forced to conduct the test.”

Eyes are also on the new launch pad in Cholsan County, northwest of the country, where the third Kwangmyongsong satellite will be launched. The previous long-range missiles were launched from a northeastern village in Musudan-ri, Hwadae County.

Experts assume that the newly-introduced launch pad in Cholsan County must be the one in Tongchang-ri, which the North reportedly started to build ten years prior and completed the construction last year.

According to the flight plan of the satellite that North Korea submitted to the International Maritime Organization, the three-stage rocket will be launched toward the southwest. The first stage booster is expected to splash down in the international waters between China and South Korea, 140 kilometers (87 miles) off the South’s Byeonsan Coast, and the second stage will land in the sea 190 kilometers off the eastern coast of the Philippines.

Unlike previous rockets that headed eastward into the Pacific Ocean, the upcoming one will fly toward China, raising concerns of the regime’s closest ally.

“We are closely paying attention to the North’s plan and international communities’ response to it,” Foreign Ministry spokesman Liu Weimin said at a regular briefing.

Chinese Vice Foreign Minister Zhang Zhijun met with North Korea’s ambassador to China, Ji Jae-ryong, the official Xinhua News Agency reported, and said it is “shared responsibility” to maintain security and peace on the Korean Peninsula and in East Asia, making a rare attempt to discourage the North from the launch.

The response of the Chinese government was distinctive from the one in 2009. At the time, when the North launched the satellite Kwangmyong-2, the Chinese Foreign Ministry said, “A satellite launch is different from missile or nuclear tests and every country has the right of peaceful development in space.” This was interpreted as support for the launch.