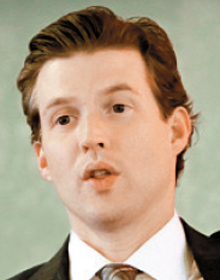 The third most-followed government official on Twitter in the United States - behind U.S. President Barack Obama and Senator John McCain - is Senior Advisor for Innovation to the U.S. Secretary of State Hillary Clinton, Alec Ross.

Ross made his first visit to Korea between March 15-17 to speak to Korean diplomats, key social media figures, students and academics on digital diplomacy and his visions of the future of the Internet and social media technology.

Although Ross is a firm advocate of Internet freedom, he admitted in an interview with the Korea JoongAng Daily on Friday that his name currently is not searchable on Google in China.

“A year ago, if you searched for me in Chinese search engines, there would have been 3 million search results - then one day, it went from 3 million to zero.” Ross believes the Internet should be kept a free and open platform.

But in the case of North Korea, Ross does not foresee the advances in a social media network to make an impact at the moment because of its isolation, both technologically and economically.

“It’s very difficult for technology to drive change in North Korea given the extreme measures North Korea has taken to create a media blackout.”

His agenda in Seoul included a breakfast lecture, Technology and the Disruption of Global Power, at the Plaza Hotel, central Seoul, on Friday for the 40th Korea Foundation Forum.

Ross co-founded an NGO in a basement called One Economy that uses technology to fight poverty. He went on to work on the Obama election campaign in 2008 before joining the State Department in 2009. Ross also led a youth forum held at the U.S. Embassy with over 120 South Korean students to discuss new technology and communication.