Fans give a boost to baseball

Fans give a boost to baseball 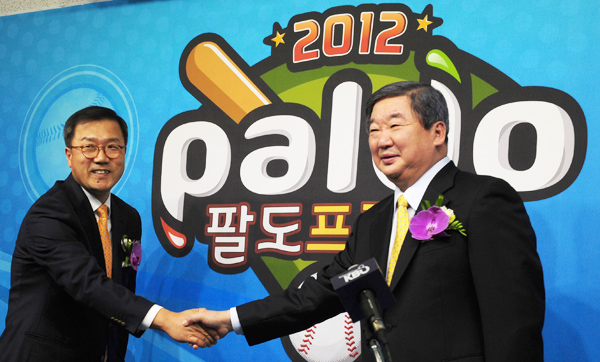 
Despite the turmoil caused by match-fixing scandals that have swept through sports, baseball could make history this year as a record number of fans filled the seats at preseason games at the weekend.

On Saturday, the preseason’s opening day, a record 43,843 fans flocked to baseball stadiums. That day’s game between the Hanwha Eagles and Seoul Nexen Heroes was later canceled because of rain.

Total attendance for the seven games over the two days was 101,351, which is also a record for preseason opening weekend. This beats the previous record of 70,452, set in eight games during the first weekend of the preseason last year.

Attendance for games in the preseason is tallied by each team based on ticket sales, as the KBO doesn’t keep preseason attendance records.

Admission to the preseason games, which will continue until April 1, six days before the official start of the regular season, is free.

Both players and managers expressed their surprise at this year’s preseason attendance records.

“I can feel baseball’s popularity,” Lotte Giants manager Yang Seung-ho said on Sunday. “Doosan Bears fans from Seoul rented a bus and came to Busan just to see the game.”

Some suggested that since preseason games are becoming as popular as regular season games, the KBO should use the opportunity to rehabilitate its image after the recent match-fixing scandal.

Kia Tigers manager Sun Dong-yol, who played with the Chunichi Dragons in the Nippon Professional Baseball league in the 1990s, suggested the KBO charge admission for preseason games and donate the proceeds to charity.

“We could charge about 1,000 won for preseason games and donate that revenue to youth baseball or charity,” he said.

Expectations for the sport this season are already high, with star players such as former Major League Baseball All-Star pitchers Park Chan-ho and Kim Byung-hyun playing for the first time in the KBO and sluggers Lee Seung-yeop and Kim Tae-gyun coming back from the NPB.

“These days, fans are not only thinking about game results but are thinking of baseball as a recreational activity,” said Lee Jin-hyung, the communications director for KBO.

Meanwhile, the KBO announced yesterday that the 2012 season will be called Paldo Professional Baseball after a sponsorship deal it signed with Paldo, a local firm that manufactures and distributes beverages, snacks and instant foods.

“Paldo has been supporting the KBO since 2009 and with their support, I hope our professional baseball league will leap forward and develop,” KBO Commissioner Koo Bon-neung said.