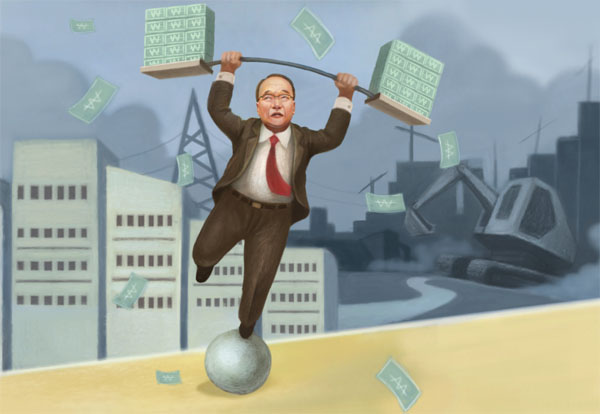 
When the euro zone crisis erupted last year, many local analysts warned that Korea should use this opportunity to reflect on the fragile state of its own economy, given the high level of debt held by public corporations and the government in addition to mounting household loans. Government and public debt in Asia’s fourth-largest economy has been mushrooming at a rapid pace.

In the last few years, Seoul has been eager to promote a number of large public works, such as the four-river restoration project and other construction and energy plans that have led state-run companies to accumulate huge amounts of debt.

Korea has also launched a series of construction projects since 2009, as it aims to build more housing units for low-income families to overcome the chronic housing crisis and create a new administrative zone in South Chungcheong called Sejong City.

According to data compiled by the Ministry of Strategy and Finance and the Bank of Korea, Korea’s public sector’s debt, including debt held by central and provisional governments as well as state-run companies, reached 789.4 trillion won ($703 billion) as of the end of the third quarter last year, up 9.2 percent from the previous year. This is double the government’s budget of 325.4 trillion won for 2012.

“The government should be aware of the mounting national debt if it hopes to maintain the current level of economic growth in the coming years,” said Park Hyeong-su, a researcher with the Korea Institute of Public Finance.

Korea’s national debt is divided into two parts: loans held by state-run firms and those owned by the government. Data shows that the growth rate of debt held by public firms, including the Korea Electric Power Corporation (Kepco) and the Korea Resources Corporation, is much faster than that of central and regional governments.

“Korea’s public sector debt just keeps rising as the government turns to state-run firms to secure funds for national projects like the four-river restoration project,” Park said, noting that acquiring liquidity from state-run firms would lower the risk of the government heading into a fiscal crisis by selling Treasuries.

Furthermore, issuing corporate bonds requires much less work as it does not need the approval of the National Assembly, whereas Congress must green-light government and Treasury bonds.

Central and regional governments have also been spending heavily through loans, bonds and treasury bonds to fund their aggressive redevelopment and growth plans.

Korea’s debt, which now stands at 80 percent of the national budget, is mainly driven by public energy firms as their loans have increased in recent years due to surging raw material prices and aggressive expansion in developing resources.

Meanwhile, Kepco’s sales last year reached 43.2 trillion won, climbing 10 percent from 2010 as the electricity firm ramped up the price of electricity on two occasions. Despite their moves to stem their losses, Kepco officials claim the company is still hemorrhaging money each year as it continues to run a huge operating loss.

The Korea Gas Corporation held total debt of 26.9 trillion won at the end of last year, compared to 21.9 trillion won in 2010, leading its debt to total asset ratio to worsen to 364.3 percent.

“One of the main reasons for our rising debt is our increased investment in securing overseas resources,” said an official from the corporation.

The Korea Resources Corporation saw its debt climb from 1.6 million won to 2.2 trillion won last year. Over the same period, its debt to asset ratio jumped to 186.4 percent. Businesses cited increased spending on overseas resource development as the main reason.

The Lee Myung-bak government has been focusing on promoting energy-related projects as part of efforts to secure future resources given the country’s dependence on imports. Public energy firms have been investing money in acquiring sources of crude oil, natural gas and overseas minerals to help make the nation more self-sufficient.

In recent years, local energy firms such as Kepco and the Korea National Oil Corporation, the state-owned energy explorer, have increasingly issued foreign bonds as they have been seeking to participate in large overseas resource development projects. Industry officials note that bidding for such projects requires state-run companies to secure large amounts of funding, and one of the best ways to raise money is to sell bonds in foreign markets.

However, concerns are growing that the government will have to step in and bail out companies or agencies that get too deep in debt.

“Energy firms under the knowledge economy ministry have been struggling under the weight of heavy debt for a while. Should this continue in the coming years, they will no longer be able to cover the loans and these will eventually have to be repaid from the government budget,” said Kim Sung-hoe, a ruling Saenuri Party lawmaker. “This would entail spending more of taxpayers’ money.”

Rising debt in the public sector poses another threat to the economy, which is already creaking under the weight of record levels of household debt. According to the Bank of Korea last month, household loans including credit card spending surged 8 percent to 913 trillion won in the fourth quarter of last year from the end of 2010.

“In recent years, household debt has outpaced economic growth, a trend that has hurt domestic demand,” said Park Deuk-bae, a researcher at the Hyundai Research Institute. “This, coupled with rising public debt, could pose a serious threat to the Korean economy.”

However, the Finance Ministry concluded recently that Korea’s national debt is relatively low compared to other developed nations’, such as Japan and the United States. According to the Organization of Economic Cooperation and Development, as of 2010, Japan’s national debt reached 199.7 percent of its GDP, and the corresponding figure for the U.S. was 93.6 percent.

While the U.S. edged just inside the OECD average of 97.6 percent, Korea was sitting comfortably with a national debt-to-GDP ratio of 33.4 percent. The ministry also forecast that this would improve further to 28 percent by 2015, but critics point out that there are two alarming trends to bear in mind: First, Korea’s level of debt is growing at a much faster pace than other nations with worse ratios, and second, rapid GDP growth could make the level of debt appear deceptively low.

Furthermore, Korea’s aging population is expected to take its toll on government spending, as demand for pensions, especially teachers’ pensions and unemployment benefits, shoots up.

Around 20 percent of the Korean population will be over 65 years of age by 2026, according to data supplied by Statistics Korea, which means the government will need a bigger budget.

Bahk’s comments come as the National Assembly has been introducing bills that are seen as fiscally unsustainable by policy makers, such as a request to compensate victims of troubled savings banks for their deposits above 50 million won using taxpayers’ money.

The minister said that “studies conducted by some local research institutes point out that such rash policy pledges could slow down Korea’s overall economic activity.”

Industry insiders warn that Korea’s mounting public sector debt could affect its credit rating, as has been the case with a number of European Union countries recently. Last year alone, Fitch downgraded the ratings and outlooks of Japan, Italy, Spain and the U.S.

So far, Korea’s sovereign debt rating has proven immune to the crisis in the euro zone and a slower-than-expected economic recovery in the U.S., but the growing burden of how it will refinance its debt poses a major threat to the government.

Moody’s also maintained its A1 credit rating and “stable” outlook for Korea late last year, despite the news of North Korean leader Kim Jong-il’s death in December. Yet it raised concern that debt among non-financial sector public firms could hurt overall growth.

“Though Korea’s debt-to-GDP ratio is relatively low compared to other developed nations’, we need to manage financial risks stemming from the fact that it is increasing,” said another official from the finance ministry.

He added that the government will maintain its stance of issuing monthly Treasury bonds.