Luke Donald wins playoff and returns to No. 1

Luke Donald wins playoff and returns to No. 1 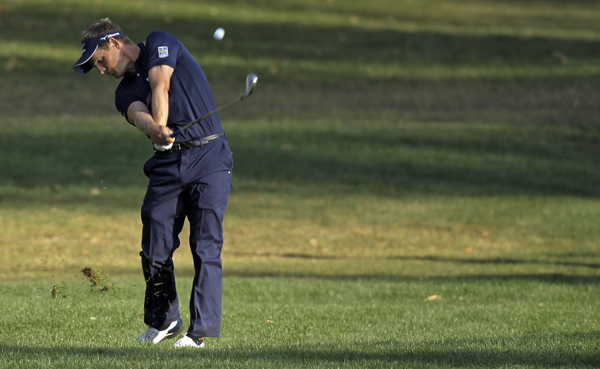 Luke Donald of England hits his approach shot on the first sudden-death playoff hole during the final round of the Transitions golf tournament Sunday at Palm Harbor, Florida. Donald made a birdie on the hole to win the event. [AP/YONHAP]


PALM HARBOR, Florida - Luke Donald returned to No. 1 in the world the same way he got there the first time. He rallied from a three-shot deficit Sunday at the Transitions tournament with a 5-under 66, then won a four-man playoff on the first extra hole with a shot out of the rough to 6 feet and a birdie putt that curled in the left side of the cup.

He gave a big uppercut with his right fist to celebrate the end of a wild day at Innisbrook in Florida - and a devastating finish for Ernie Els.

Els was among eight players who were tied for the lead at some point in the final round, and he had a one-shot lead going into the closing stretch known as the “Snake Pit” at the Copperhead course.

Donald ended Rory McIlroy’s two-week stay atop the world ranking. He first reached No. 1 in the world by winning a playoff over Lee Westwood at Wentworth last May. This required more work as Donald had to beat Jim Furyk, Robert Garrigus and Bae Sang-moon in sudden death.

Furyk, who closed with a 69, had an awkward lie just short of the bunker and left himself a 40-foot putt. Bae (68) missed his birdie attempt from 18 feet. Garrigus, who birdied the last two holes in regulation for a 64, pounded his tee shot and hit wedge into 7 feet, but pulled his birdie putt.

That set the stage for Donald, who had hit a superb shot from the rough that barely cleared the bunker.

“I was a lot more nervous the first time,” Donald said of getting to No. 1. “That certainly wasn’t my focus. I was just focused on trying to win the tournament, and it worked out.”

Scott Piercy, who finished his 62 before the leaders teed off, joined Els (67), Ken Duke (68) and Jeff Overton (66) in a tie for fifth. Overton and Piercy had birdie chances on the 18th, neither knowing it would be enough for a playoff. Duke missed a 5-foot par putt on the 17th hole to fall out of a six-way share of the lead.

As sweet as it was for Donald, it was painful for Els. He needed to win to secure his spot at Augusta National, and he was poised to do just that with a flawless round until the end. But he missed a 4-foot birdie putt on the 16th that would have given him a two-shot lead, then fell back into a six-way tie with a tee shot that sailed well right of the par-3 17th green and left him no chance of getting it close to save par.

He pulled his approach into the light rough left of the flag on the 18th, chipped below the hole and seemed a lock to be in the playoff. But his par putt never even touched the hole.

Els needs to be in the top 50 in the world after next week, and his four-way tie for fifth only moved him to the lower 60s. Because the field isn’t strong at Bay Hill, he might have to win to have any chance. Els also is playing in the Houston Open.

Els barely restrained himself in a brief TV interview after the round. There really wasn’t much to say later.

“I’m pretty hot now, and it’s difficult to talk with a straight head here,” Els said. “If I take stock, I think I’m playing good golf, and I’ve got to head into the next couple of weeks trying to get a win.” AP