Fuel surcharges for international flights are expected to rise by over 10 percent in April due to the surge in the price of crude oil, reaching highs not seen since October 2008, local airlines said yesterday.

Next month’s fuel surcharges are determined by the average Mean of Platts Singapore (MOPS) trade price from Feb. 16 through March 15, which reached 321.89 cents per gallon last Wednesday. 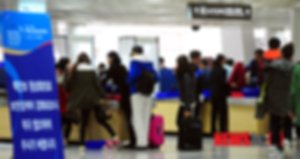 For round-trip flights to the Americas through Korean Air, the country’s largest airline, fuel surcharges will increase 12.7 percent from $330 to $372.

Asiana Airlines, the country’s second-largest airline, also said it will raise its surcharge for flights to the Americas by the same amount. This is almost double the level charged one year ago.

This most recent hike in fuel surcharges is a continuation from the 7.1 percent increase implemented on March 1, which raised prices to the current $330 from $308.

Analysts attribute the rise in MOPS prices and the ensuing spike in fuel surcharges to an increase in demand from emerging economies and the standoff between Iran and Western nations.

Surcharges for domestic flights will stay the same at 13,200 won ($12), as the basis for fuel surcharge computations for local flights is different from those of international flights.

While travelers may be discouraged by the rising fuel surcharges, air carriers said the spike only reflects 60 percent of the recent increase in oil prices.

On Friday, Dubai crude oil traded at $122.23 per barrel. Along with rises in crude oil prices, the average retail price of regular gasoline surpassed 2,100 won per liter for the first time in Seoul last week.